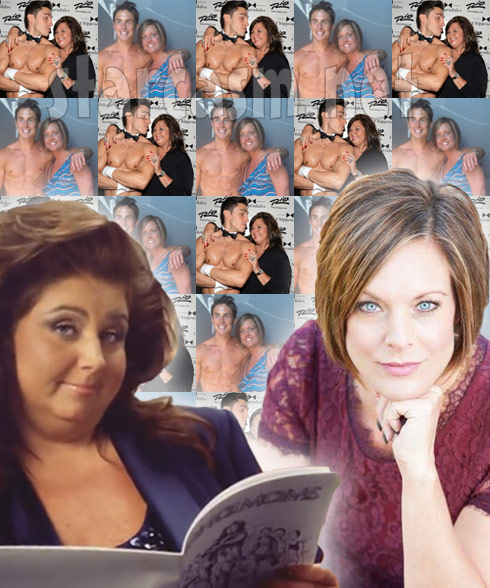 After TMZ first reported that one of the satellite parents from Dance Moms, Kelly Hyland, was arrested back in November for assaulting show star Abby Lee Miller after a cat-fight over a casting issue, many speculated that the whole thing was just a drummed up publicity stunt for the show.

Now Abby Lee and Kelly have appeared in and or at a New York City courtroom over the supposed ruckus and after the latest from TMZ and the bizarre comments from Miller I have to say I’m still not sure if I believe it!

Sources state that Hyland is now legally forbidden from having any contact whatsoever with Miller after today’s hearing. This means no texting, Twitter — nothing.

After both ladies appeared at the location, with Lifetime cameras and TMZ paparazzi in tow mind you, Miller made the following strange statements:

In case you can’t catch this TMZ embed, here’s the transcript:

“I just can’t believe all this. I can’t believe she pulls up, we’re standing out here in the freezing cold looking like idiots and she pulls up in a BMW… She pulls up in the fancy car and waltzes in with her attorney. No way… I have to stand by what I believe in and I believe that justice (will be served). My friend said at home, I said, ‘Do you think I’m doing the right thing?’ and they said, ‘Hey Abby, if you don’t press charges against her the next thing it’s going to be those two kids killed in the car, with her.'”

Hold up. Did Miller just insinuate that the reason she followed through with filing charges is because she, or at least her “friend at home,” believes Hyland’s actions could wind up getting Kelly’s two daughters, Brooke and Paige, killed!?! She emphasized the “with her” part which would seem to suggest she’s talking about Hyland’s dancing daughters. Am I hearing that wrong?

Anyways, then the paps asked Abby what she thought about Hyland having a police escort – which caused Miller to share her thoughts on Kelly’s sexy:

“I don’t know. I think men thinks she’s sexy. I think dumb, I think sometimes men think, ‘Well, she’s a dumb girl, so I’ll help her out,’ she plays the dumb blonde thing. I don’t do that. I’m very aggressive, I know what I want. I go after it. I don’t need a man to do my dirty work for me. She does, but notice it wasn’t her husband.”

Kelly the sex symbol? Man, this whole thing has me confused (and entertained).