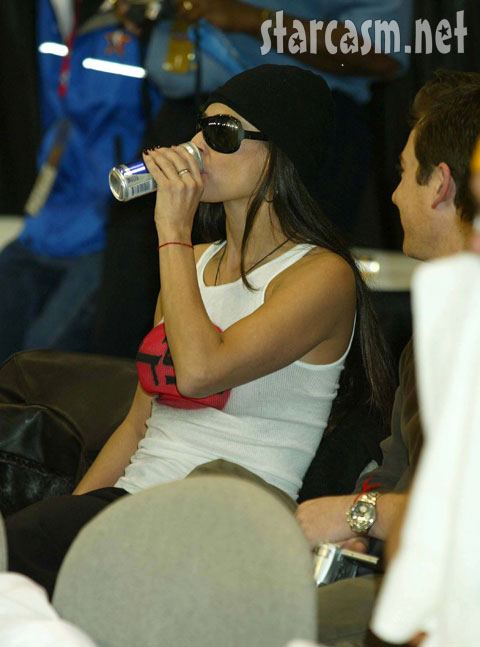 There’s lots of rumors swirling about what sent Demi Moore to the hospital last week; whip-its, a marijuana-like substance from a head shop, alcohol, other drugs, or a mixture of all or some of these things. But there’s also a report that besides whatever else she may have been doing, Demi had recently been barely eating and only guzzling Red Bulls. There’s a August 2010 Harper’s Bazaar cover story that supports this idea. In it, they report Demi she was drinking coconut water to ween herself off of an 8 Red Bull a day habit! Yikes that’s a lot! Red Bull sources also told TMZ that Demi was paid to market the product, and basically got as much of it as possible shipped to her house since 2002 so she would never be without it!

I’ve never done hard drugs, but I AM a caffeine addict. I can usually manage it, but have had periods of “caffeine intoxication” that are far from fun: it can cause dizziness, heart palpitations, anxiety, and results in fatigue-ridden hangovers that last for days (or weeks, depending on how severe the caffeine intake has become.) It can definitely make you feel “exhausted,” so that PR word probably wasn’t totally inaccurate if Demi was recovering from Red Bull withdrawals.

Red Bulls contain 80 milligrams of caffeine, the recommended daily limit is about 250 milligrams, so if Demi was drinking 8 a day (and this is back in 2010, she could have been drinking more during this latest crisis,) she was getting nearly triple the recommended limit. Also, just from personal experience, Red Bulls can cause more intense “caffeine highs” and more difficult withdrawal symptoms than the same caffeine equivalent of coffee seems to (a cup of coffee usually contains more caffeine than Red Bull, about 100 milligrams, give or take depending on the brew.) They don’t have the slogan “Red Bull gives you wings” for no reason (maybe the synthetic bull semen taurine IS a powerful ingredient and not just a bunch of bull.)

Demi’s Charlie’s Angels director McG also said she drank A LOT of Red Bull on the set of that movie several years ago.

It’s not exactly like having a crack addiction, but not eating and drinking Red Bull could probably put your body and mind in quite a state, not to mention if you’re not drinking enough water (caffeine dehydrates you big time) or mixing it with other drugs. I think we can tell from all of this that Red Bull may in fact be the secret to eternal youth! Even though Demi’s been waaay to skinny and sad lately, she looks amazing.

Demi is reportedly not headed to rehab as previously speculated, but E! says she’s instead seeking spiritual counseling (which could be linked to her Kabbalah faith.) However, as of February, Demi was reported to be receiving rehab treatment for an eating disorder and addiciton issues at famed Sundance luxury rehab center Cirque Lodge.

PHOTO above is of Demi Moore guzzling a Red Bull November 13, 2003 during the 2004 NBA Celebrity All-Star Game.

Why aren’t Ashton Kutcher and Demi Moore divorced yet?