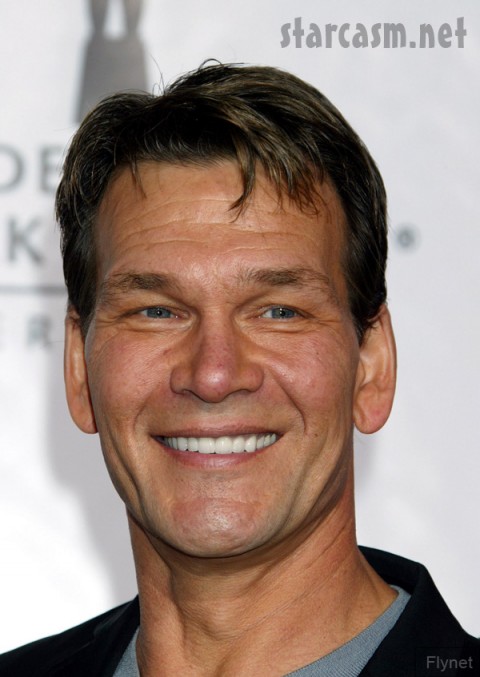 Patrick Swayze passed away last night after a nearly two-year battle with pancreatic cancer. His publicist issued this statement:

“Patrick Swayze passed away peacefully today with family at his side after facing the challenges of his illness for the last 20 months.”

Ever since he was diagnosed, Swayze has been strong in his fight against his deadly form of cancer, even starring in a television series, A & E’s The Beast, during his chemotherapy treatments. Swayze has had a varied career, but he’s most beloved for his sexy footwork. There’s just something about a man who can dance.

When Patrick Swayze and Jennifer Grey made Dirty Dancing (1987), they thought they were working on a low-budget afterthought. The plans for Dirty Dancing were to be in theaters for a week and then go straight to VHS. Instead it became a box office sensation and video edition. Countless fangirls and boys have worn out their VHS copies, and probably scratched up their DVDs after a few million viewings.

Here’s what Jennifer Grey had to say about her co-star’s passing:

“When I think of him, I think of being in his arms when we were kids, dancing, practicing the lift in the freezing lake, having a blast doing this tiny little movie we thought no one would ever see. “Patrick was a rare and beautiful combination of raw masculinity and amazing grace,” she said. “My heart goes out to his wife and childhood sweetheart, Lisa Niemi, to his mom, Patsy, and to the rest of their family.”

Swayze also steamed up the screens without using his feet in 1980’s Ghost, where he played a ghost being channeled through Whoopi Goldberg’s character to reconnect with his girlfriend, played by Demi Moore. Here’s what Whoopi and Demi said of Patrick:

Patrick you are loved by so many and your light will forever shine in all of our lives. And in the words of Sam to Molly. ‘It’s amazing, Molly. The love inside, you take it with you.’ I love and will miss you Patrick.”

“Patrick was a really good man, a funny man and one to whom I owe much that I can’t ever repay. I believe in Ghost‘s message, so he’ll always be near.”

Here’s a clip of Patrick dancing with his wife of 34-years, Lisa Niemi, at the 1994 World Music Awards. She has some moves too, and they make a sexy, sweet pair.