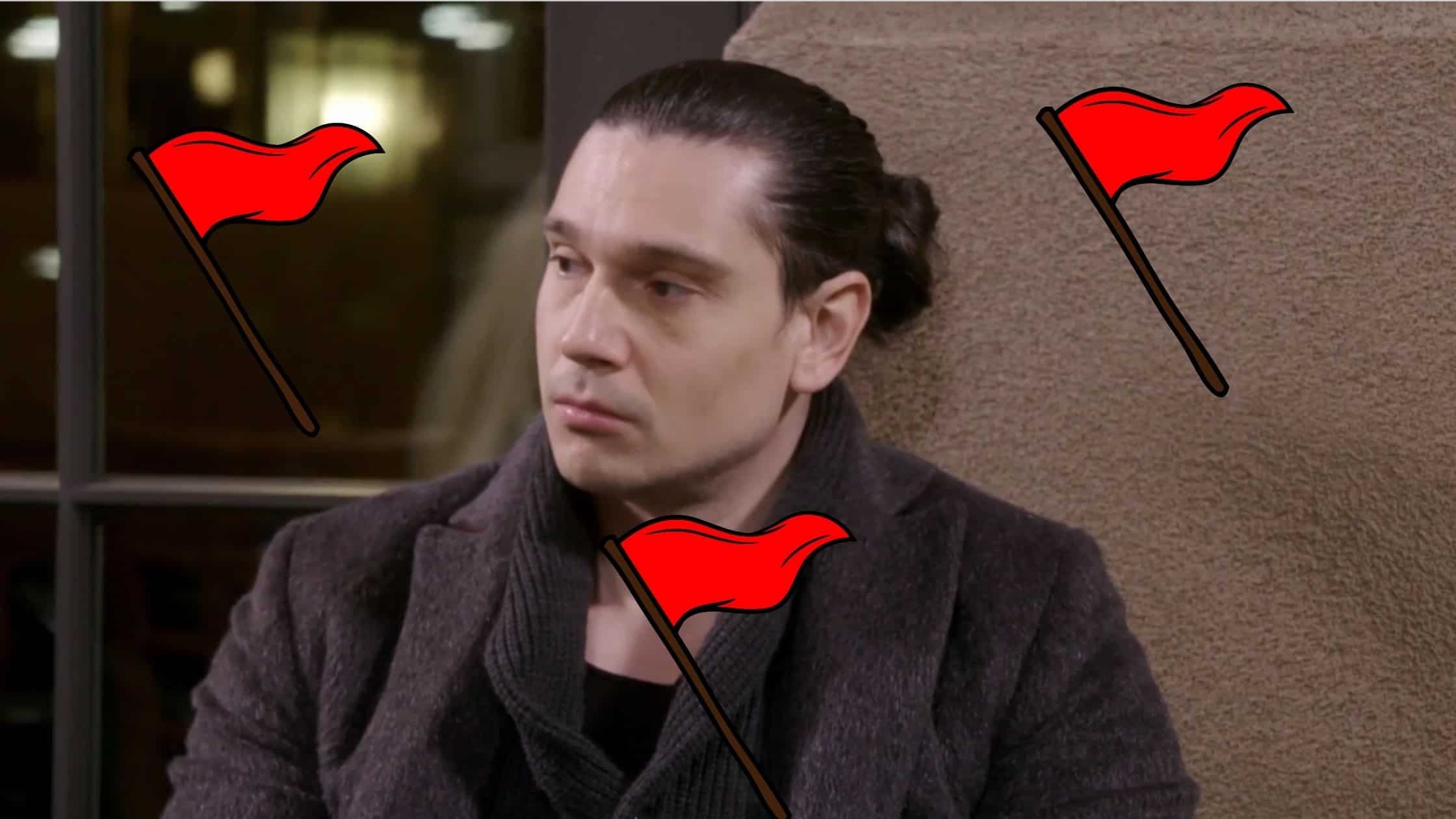 Darcey Silva has had a tough time with love ever since she started filming with Jesse on 90 Day Fiancé: Before the 90 Days. During the second season of Darcey & Stacey, her show with her twin sister, she’s struggled in her relationship with Georgi Rusev, an immigrant from Bulgaria. He proposed to her at the end of Season One, but by the start of Season Two, which started filming just 48 hours later, Darcey was in tears. They stayed together, but Georgi is continuing to hold up red flag after red flag and give her little warmth despite claiming that he loves her.

When the COVID pandemic hit, Georgi quit his job as a masseuse in the DMV (D.C., Maryland, Virginia) area and came to Connecticut to propose to Darcey and live with her. He hasn’t worked since, and Darcey has been taking care of all of his expenses. He even hid $1400 cash in a sock, which made Darcey think he was stashing away her money.

On his Instagram bio Georgi has a link to a website called Home Spa Therapy where you can book at-home massages. The pricing goes from $150 for a 1 hour massage to $230 for 2 hours.

Georgi has some glowing reviews on the site, but they all seem to reference the DMV (DC, Virginia, Maryland) area, where he no longer lives.

Darcey’s father Mike confronted Georgi about whether or not he really loves Darcey, the money in the sock, and working. Georgi told Mike that he loved Darcey (after pausing for a painful minute) and that it “killed him” that he couldn’t work because of the quarantine.

Georgi said the cash in the sock from from his own savings, which had withdrawn and tried to give to Darcey to help with bills. He claimed Darcey refused the money, so he stored it in the sock because the bank was closed. He said Darcey must have forgotten that he tried to give her the money.

During an argument before Darcey left for her plastic surgery in Turkey, Georgi told her it’s not convenient for him to live rent-free with Darcey in Connecticut because he has no friends or connections there and doesn’t even want to be there.

Stacey’s husband Florian also isn’t working right now because he hasn’t received his work permit yet and it would be illegal for him to do so, but Georgi has been in the U.S. for a years already.

Is Georgi looking for a Sugar Mama?

Georgi Darcey to buy him thousands of dollars worth of designer clothes on the twins’ birthday. This happened during the COVID lockdown, so only a few people were able to go into a store at the time. Stacey was upset that Georgi seemed to be making their day about him.

This behavior on Darcey’s birthday was a red flag for Darcey’s family because it made them question what Georgi’s true motives may be. It’s one thing to be out of a job because of moving and COVID, but quite another to go on designer shopping sprees.

Georgi’s ex-wife Octavia also warned Darcey that she found him using a “Sugar Mama” website. Darcey has stayed in contact with Octavia, who tells her that Georgi is always very closed off, and advises her to leave.

Georgi allegedly called Darcey, Stacey, and everyone around them “American Trash”

Georgi denies this, but Darcey and Stacey’s friend Debbie says she heard from someone else that Georgi said that Darcey and everyone around her are “American Trash.” He also supposedly said that he would stick around Darcey until the money ran out.

Debbie would not reveal her source because of loyalty to them, but Georgie claimed this never happened. The Twins’ friend Reina was there at the dinner where Georgi denied saying all of this, and she found him to be genuine and apologized to Georgi for believing he said these things.

It’s impossible to know if he did or did not say these things, but the allegation sows a seed of doubt.

Before the twins left to get plastic surgery in Turkey, Georgi complimented Stacey’s skin and says it looks better than Darcey, who he says “still has wrinkles.” This insulting comparison was completely unnecessary and done only to hurt Darcey. It’s not healthy for anyone to make these types of digs in a romantic relationship, or a friendship. 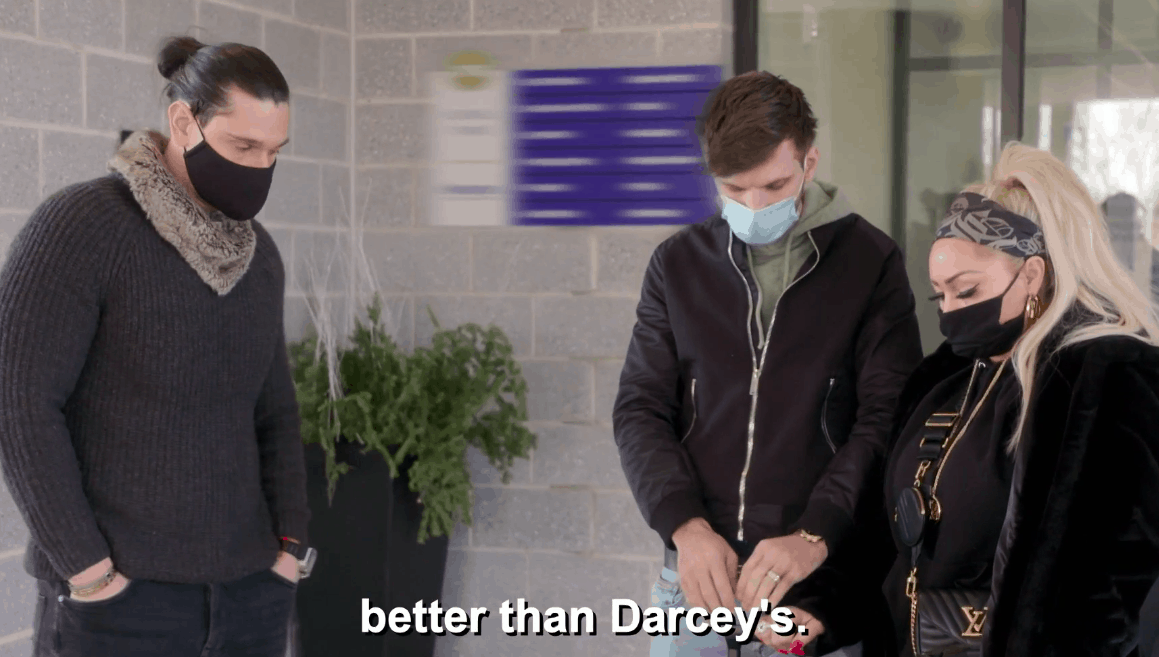 Georgi also hesitates when Darcey or other people ask him if he loves Darcey, and seems cold when he’s around her.

Darcey may be caught in a cycle

Georgi often gets in petty fights with Darcey, or gives her the silent treatment to make her feel uncertain of the future. This makes her feel the way she felt in her relationship with Jesse, and leads her to believe she may be caught in a cycle of being in relationships with a certain type of man who behaves in toxic ways towards her.

She wants to believe that he really loves her and wants to marry her, but feels he’s showing “more hurt than love.” Georgi accuses Darcey of “killing the love.”

Furthermore, Darcey suspects that when Georgi is being nice to her, it isn’t sincere, but is instead a form of “love-bombing.” Love-bombing is when one person showers another person with gifts, compliments, adoration, and/or attention not out of genuine feelings, but in an attempt to manipulate them. It’s often part of a cycle of abuse.

He casually broke up with her before major surgery

When Darcey and Stacey leave for Turkey, Stacey and Florian have a loving embrace while Georgi hardly touches Darcey with his hug and tells her he thinks they’re now friends, and “not engaged.”

He tells her to be safe, and that he hopes someday she finds someone to be happy with. He says she hasn’t been happy with the relationship since day one since she always complains.

Darcey replies that they both need to find out what they need and want.

A tearful Darcey says she doesn’t want any man to talk to her the way Georgi talked to her. She just wants to be with Stacey right now. She’s just living in the present moment and wants to feel free because she doesn’t want to be “hurt by that man.”

While she’s away, Georgi continues to live in their shared apartment, and video calls Darcey’s ex Jesse, who tells Georgi that Darcey is a cheater.

Instead of piling on with Jesse, who has aligned with Tom, another of Darcey’s exes, Georgi is defensive of Darcey and refusing to believe that she’s a cheater. At first he did complain about her trust issues to Jesse, but then softened on Darcey because he realizes she’s had these issues for awhile and they’re not just about him.

However, another red flag is that Georgi contacted Jesse as a way to kind of “get back” at Darcey for being in contact with his ex. His theory is that exes always lie and are trying to start trouble, so his defense of Darcey in this situation may be another manipulation tactic to prove his own point about Darcey talking to his ex Octavia.

BEFORE THE 90 DAYS What did Tom Brooks’ letter to Darcey Silva say?