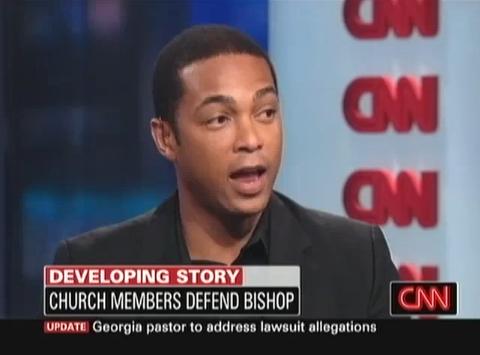 While interviewing three members of embattled Bishop Eddie Long’s congregation CNN news anchor Don Lemon confessed that he was a victim of a pedophile as a young boy.

While an expert was explaining the ways in which religious leaders go about coercing minors into sexual activity Lemon added that, “Those are the things that they do.  The language, This doesn’t make you gay, if you do this.”

This was Lemon’s direct and surprising statement during the interview :

“I have never admitted this on TV.  I’m a victim of a pedophile when I was a kid. Someone who was much older than me.”

Here is the video of the unplanned and honest moment from Lemon:

Lemon, who anchors CNN’s weekend show CNN Newsroom, later took to his Twitter account to explain the unexpected confession.  Here is his tweet that followed the interview:

So what do you think of Lemon’s confession?  Was it appropriate for him to air his personal life and background during the interview or do you find the choice to be misguided?

VIDEO: Band of Horses surprises Oslo couple by performing at their wedding