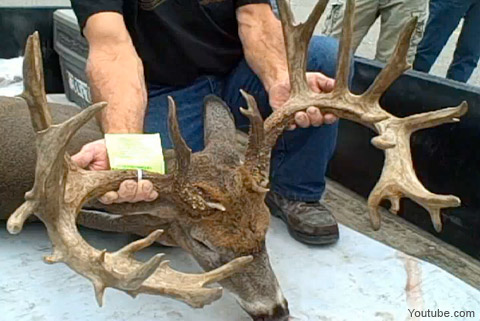 Wayne Schumacher of Fond du Lac, Wisconsin is making headlines in the hunting world after killing a 30-point whitetail buck with a bow on Sunday. Local folks gathered outside of Dutch’s Trading Post in Fond du Lac to catch a glimpse of the trophy buck with an inside antler spread measured at 20 1/2 inches and a field-dressed weight of 225 pounds.

Schumacher says the deer was shot at a distance of just over 15 yards. Deer and Deer Hunting magazine has sent reps to get an official “green” score to record in the archery records. According to postcrescent.com, the current record for a whitetail in the state of Wisconsin is 233 and “one estimate Monday afternoon was at 251, before deductions.”

I have to admit I don’t have the slightest clue what most of this means, except for the “30-point” part. But, I’m not so ignorant that I don’t realize that is a crazy rack of antlers! Or, in the words of Schumacher in reference to some of his other hunting trophies he uses at hat racks, “This one could hold some big caps.”

Hunting is a volatile issue that has most of the country divided. Which side do you fall on? Take the starcasm.net poll and find out!

Cast your vote to see the results so far!

Here are a couple videos of Wayne and the “Lucky Buck:”

(WARNING – These aren’t exactly “PETA-authorized” videos and there are some graphic shots with blood and at least six ball caps.)