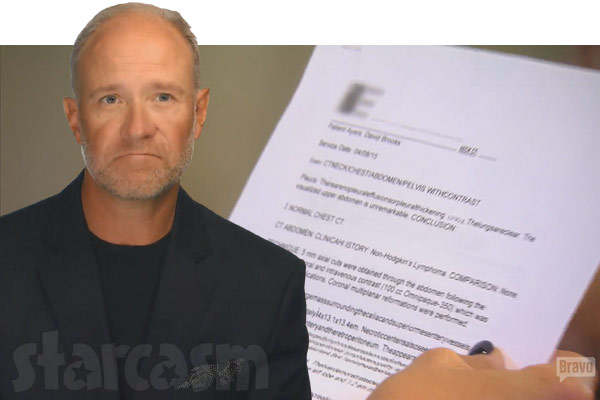 The Real Housewives of Orange County has seen a sizable bump in the ratings this season, thanks in large part to the #Cancergate scandal involving Vicki Gunvalson’s on-again, off-again love tank filler Brooks Ayers and the validity of his claims to have been diagnosed with cancer.

Brooks tried to prove his cancer diagnosis in an episode in which he shared his medical records with Vicki’s co-star, and notorious Brooks nemesis, Tamra Judge. Tamra looked at the report, which appeared to be results from an abdominal CT scan, and within seconds noticed a pretty big red flag: There was one line of the report with zero spacing. Here’s a photo: 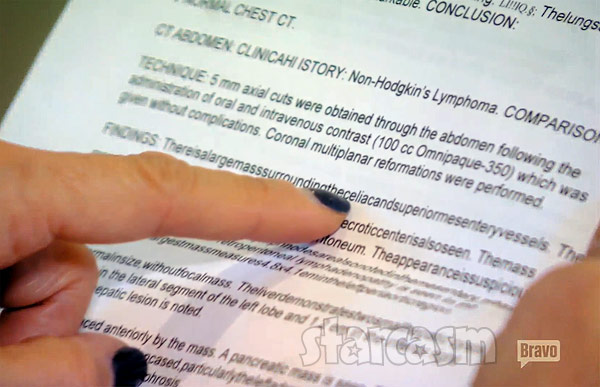 That error, paired with numerous other red flags in the report as well as inconsistencies in Brooks’ story, caused Tamra, and the internet, to assume Brooks had faked the document. Amazingly, if you look at Brooks’ Facebook page and his LinkedIn profiles, he lists his occupation as National Accounts Manager for Certified Medical Consultants. Here is a description of CMC from their website:

Certified Medical Consultants is a leader in the IME field. We serve hundreds of clients each month by providing Independent Medical Examination reports utilizing our network of over 20,000 physicians, located throughout the United States and in other countries. In addition to our IME services, we can also perform Peer reviews, Diagnostic test reviews, Telephonic conferences and more. All opinions are those of individual physicians. Certified Medical Consultants employees do not compile information for the physicians. All reports are proofed for errors and each report is agreed to by the physicians via signature.

We are a medical cost containment company servicing the needs of Insuring Entities, we specialize in:

You may order our services via email, fax, phone or regular mail. Whichever method you choose, we want to make it convenient for you. In select areas, we have staff that can even visit and pick up your request personally.

That certainly seems like a job that would give you the skills to fake a medical report! Actually, if Brooks did fake the medical records, it seems like he should have been able to do a better job than he did. Here’s the clip in which he shows the report to Tamra:

Vicki later group texted some of her cast mates and mentioned that Brooks had a “PET/CT scan done at Newport Imaging which still shows cancer.” (I should point out that the error-laden document Brooks showed Tamra didn’t mention a PET scan, only a CT scan.)

In this next clip, Meghan King Edmonds reveals that she called Newport Imaging and they informed her that they do not do PET scans for patients with non-Hodgkin’s lymphoma:

It has since been reported that Newport Imaging is considering suing Brooks Ayers! “Since Newport Imaging doesn’t do the type of scan he showed on camera,” a source tells Real Mr. Housewife, “they are possibly contemplating investigating him for fraud, as he used their logo.”

The Brooks faking cancer scandal will be addressed on Part Three of The Real Housewives of Orange County Reunion, although Brooks reportedly won’t be sitting with Andy and the ladies because of a prior work commitment. (I guess there were some CMC accounts that needed managing elsewhere?) However, Brooks did do a pre-recorded sit down with Andy Cohen int he WWHL clubhouse.

In addition to Vicki’s backtracking, Brooks’ detractors are making some bold statements that I don’t think they would be making unless Brooks came out looking like a liar at the Reunion. Here is an excerpt from Tamra Judge’s most recent Bravo blog entry:

As far as I am concerned I am not the backstabber or the bad friend Vicki, YOU ARE! There is nothing worse than covering for a man that is lying about something as serious as cancer and especially to the extent it was taken too. I know you guys didn’t hear all the inconsistent stories that we heard, but you did get to hear this doozy: “Brooks was so sick after chemo that Vicki called Terry Dubrow and he sent over a doctor to administer an IV.” She told that to Briana and to Shannon back in October before we even started filming. So does that mean Vicki knew Brooks was lying about having cancer before we even started filming? Are they both in on it? You will have to wait until the three-part reunion for those answers. 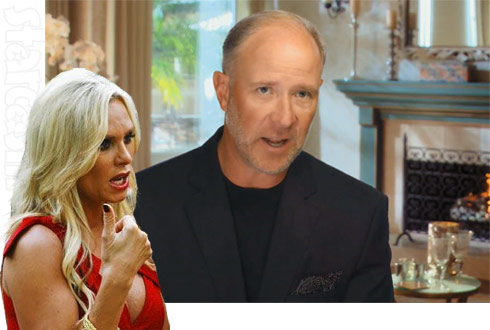 I suppose we will all have to tune in to the Reunion to find out!

Here are the synopses from all three parts of the Reunion with air times:

RHOC Season 10 Reunion Part One
Airs Monday, October 19 at 9/8c
“Meghan makes her mark on her first reunion by clashing with Vicki over her step-mom comments and demonstrating what ‘judgey eyes‘ looks like. Tamra reveals the heartbreaking family drama she has been keeping secret for the past year. A housewife from the past [Alexis Bellino] speaks her mind about Tamra’s religious transformation and Vicki shares hilarious memories of her late mother.”

RHOC Season 10 Reunion Part Two
Airs Monday, October 26 at 9/8c
“While Shannon faces scrutiny about her marriage and David’s affair, tensions rise when Heather gets heated about Vicki’s betrayal of Tamra. Jim Edmonds joins the ladies on the couch and is put in the hot seat about his marriage to Meghan. Briana makes an appearance and she’s no holds barred when it comes to her opinions about Brooks.”

RHOC Season 10 Reunion Part Three
Airs Sunday, November 1 at 8/7c
“The women and Briana confront Vicki head on with their doubts about Brooks’ cancer. Shannon provides shocking details regarding the validity of the PET/CT scan, Tamra and Heather confront Vicki about the possibility of being blackmailed, and all of the ladies have strong reactions to Andy’s taped interview with Brooks. In the end, Vicki makes a stunning revelation that has everyone doubting what they’ve heard.”

Has Fernanda Rocha been bumped from the cast of The Real Housewives of Orange County?

Gretchen Rossi is a singer now, releases single “Nothing Without You” for Jeff Bietzel