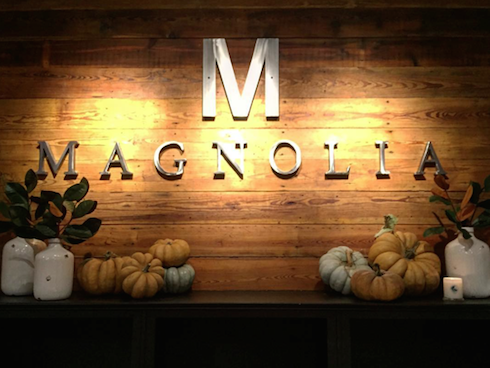 The Fixer Upper silos were supposed to be celebrated with a grand opening party over Halloween weekend. And they still will be…it’s just that Joanna and Chip Gaines couldn’t resist opening their doors two weeks early, for a Fixer Upper surprise!

In case you were unaware, a major plotline for upcoming third season of Fixer Upper is the Gainses’ renovation of two huge, former cotton oil silos in downtown Waco TX. Their intention? To polish up the Fixer Upper silos and move their entire Magnolia Homes operation inside, thereby branding the Magnolia Silos, turning an empty piece of prime real estate into a showroom for the city, and becoming local saviors. Joanna and Chip have been documenting every step of the process on social media for about a year, and, now that the Fixer Upper silos are just about ready, the pair has been promoting the big unveiling.

It was supposed to happen with a Texas-sized party on October 30th and 31st–and that party is still happening, so, if you’ve got tickets, don’t worry. But, as luck would have it, the Fixer Upper crew finished with the Magnolia Silos a little bit ahead of schedule–which means that, this week, Joanna and Chip simply opened the front doors for a surprise soft open.

And “surprise” is right: fans were shocked and delighted in equal measure. Check out the reactions!

Magnolia Silos are up and running! ? My heart is happy. I believe in this city and its people so much. pic.twitter.com/XA0J4apZdw

#drpeppermuseum staff welcomes Chip & Joanna to the neighborhood during the soft opening of @MagnoliaMarket silos! pic.twitter.com/TPbHxYcTw8

I don’t think my husbands grandma will ever wash her hand after @chippergaines kissed it today! pic.twitter.com/uoGuWfmrE0

If you were planning a trip to Waco to check out the new Magnolia Market in the near future, you might want to change your plans–feel free to pack up and go right now! As for where to stay, we’re still waiting for confirmation on whether or not there actually is a Fixer Upper hotel. Might need to watch all of Season Three for confirmation on that one…