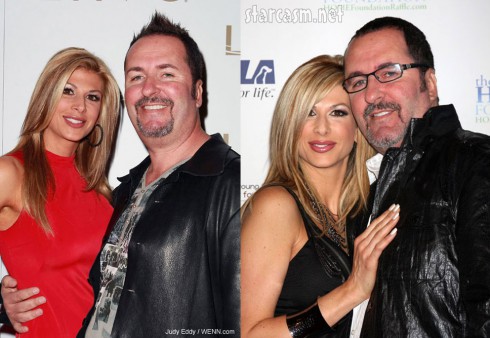 Jim Bellino’s wife got the bump taken out of her nose recently, but Real Housewives of Orange County cast mate Tamra Barney claims Jim had some work done himself. Did he really have a chin implant?

Tamra saw Jim at a Vegas event on last night’s episode and a string of “Holy Balls” came out. In voice-over she elaborated “When I saw Jim, I was a little bit shocked. He had such a big chin. Jimmy “The Chin” Bellino got a chin implant, I hear. And I have to say, it looks fabulous!”

Did he really get a chin implant? We dug up some photos of Jim for comparison. The photo on the right is from 2010, and the one on the right was from 2011, around the time they were filming this season. His chin IS very prominent in the second photo, but he appears to have lost weight, so that might be what’s making it look so different. The shape of the chin looks the same, but who knows, he could have had some work done? There were rumors on the ‘net that he also got neck liposuction. What do you think?