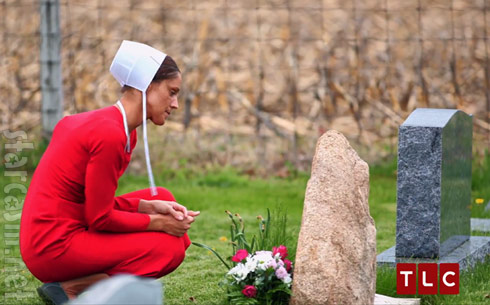 On tonight’s premiere of the third season of TLC’s Breaking Amish we get to meet the new batch of Amishfits who are choosing to risk shunning from their Amish communities as they head to The Big Apple to try out the English lifestyle in the New York City borough of Brooklyn. While leaving loved ones behind is never easy, it is something that cast member Vonda Schrock is no stranger to after losing her boyfriend to cancer in 2008.

In a preview clip posted earlier today on ExtraTV.com, Vonda talked about her boyfriend’s passing, how it has impacted her life, and why it is part of her motivation for going to New York City.

“May 6 it will be six years [since] I lost my boyfriend,” Vonda begins as she lays flowers at a grave. “My boyfriend passed away from cancer.” She gets a little emotional as she reveals details about what it was like after his diagnosis. “At the time he was diagnosed, he only lived eleven weeks after that. His whole last week that he was still alive he was in the hospital because they had to have him on life support and stuff,” she says. “It was just really something that I will never forget because…we literally sat there as he, like, passed away.”

Vonda then openly wondered if perhaps he would have had a chance at a longer life if he had not been Amish. “A lot of Amish don’t go to doctors, they just use home remedies instead,” she explains. “I sometimes think maybe that if he would have gone to the doctor more before, maybe we could have stopped it.”

“Before he passed away, I told him, like, I don’t think I can move on,” Vonda says of their last moments together. “We really were in love, and I told him that I just…don’t want to be with anyone else. But he told me he wants — like, he wants me to, so…I know he wants me to be happy. So, someday, maybe.”

She then explains that it was that “maybe” that motivated her to make the decision to go to New York. “Ever since he’s passed away, I just feel lost, and I guess that’s why I want to maybe take a chance and go to New York and see — try to find myself.” 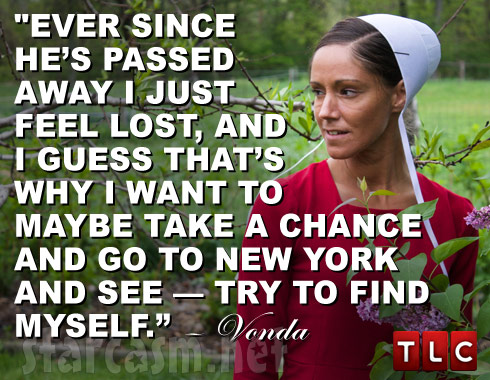 I did some research and found the obituary for Vonda’s boyfriend, whose full name was Keith Alan Lambright. Among Keith’s survivor’s it includes “special friend Vonda Schrock of Shipshewana.” Keith was only 20 years old when he passed.

Friends may call after 2 p.m. today and all day Friday at the family home, ***** C.R. **, Goshen. The funeral service will be at 9:30 a.m. Saturday at the family home. Bishop Perry S. Miller and the home ministers will officiate. Burial will be in Thomas Cemetery, Goshen. Miller-Stewart-Funeral Home, 1003 S. Main St., Middlebury, is assisting with arrangements.

He was born July 16, 1987, in Goshen to Earl Lambright and Susan (Bontrager) Lambright.

They survive along with two sisters, Emily K. and Eileen R. Lambright; four brothers, Karlin A., Kendon E., Jared M. and Jonathan M. Lambright, all at home; grandparents Freeman and Susan Lambright of Middlebury and Orus U. and Vera Bontrager of Goshen; and special friend Vonda Schrock of Shipshewana.

Mr. Lambright had worked for R & M Concrete of Shipshewana. He was a member of the Old Order Amish Church.

To find out how Vonda’s journey turns out, tune in to episodes of Breaking Amish Brooklyn airing Thursday nights at 10/9c on TLC.