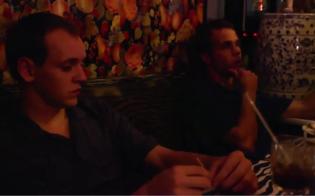 Among all the interesting things that have happened as during Breaking Amish, one of the strangest was a dinner conversation the kids had about what some of them claimed was a rampant bestiality problem in the Amish community.

Jeremiash Raber in particular pointed out that this was kind of a problem where he came from.

Kate gets upset at where the conversation is going, while the rest of them seem perfectly comfortable with the premise that this happens a lot with the Amish.

During the reunion, Jeremiah said that he had personally witnessed multiple men come forward and confess that they were having sex with animals in front of the church.

This is anecdotal information, and perhaps makes it seem more prevalent because men in other communities might not end up confessing this in public. The general consensus is that bestiality isn’t prevalent in the Amish community, and probably occurs no more often than it does in other places.

The Huffington Post talked with Dr. Hani Miletski, a psychotherapist who wrote a book on bestiality, who said “In my research, I have not heard of bestiality within the Amish population.”

The Google News archives only offered up two cases of Amish bestiality in the past few years:

-In 2010, two Amish brothers were arrested in Grant County, Wis., following a three-month investigation into allegations of incest and engaging in bestiality on a local farm. According to a report by Channel 3000, Grant County Sheriff Keith Govier said at least six different family members, a cow and a horse were victims of the alleged crimes, which they believe occurred over a three-year period. It was, the sheriff said, one of the strangest and most disturbing cases he had seen. “I don’t believe this is indicative of the Amish community here in Grant County,” Govier said at the time.

-In 2011, two Amish cousins were accused of separate counts of sexual misconduct involving a horse in Centerville, N.Y. Police said the incidents took place on the men’s respective family farms. According to The Wellsville Daily, a tip from the Humane Society led to the arrests. The men were both charged with misdemeanor sexual misconduct with an animal.

Although two cases is two too many, it doesn’t seem to indicate a trend, or widespread problem.