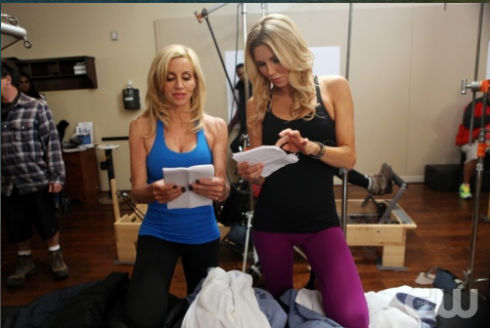 She might be leaving Real Housewives of Beverly Hills, but Camille Grammer isn’t leave the BH any time soon. In fact, she’s guest starring on (the sadly canceled) 90210 tonight, along with fellow Real Housewives cast member, Brandi Glanville! In November 2012, Brandi tweeted, “I just found out I’m going to be on the new 90210 with Camille… So nervous but happy! I can’t act. Good thing I’m playing myself.” 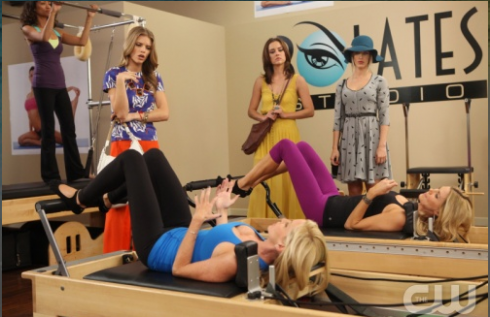 In the episode entitled “Dude, Where’s My Husband?” Brandi and Camille are working out and it looks like it could be any other day on Real Housewives: gossip, name-dropping, talking about Bentleys. Things get a little meta when they start discussing life as divorcees, and it sounds like a real conversation between the two real-life divorcees. Until, of course, 90210  star Naomi Clark (AnnaLynne McCord) casually asks if she got married the night before, as she can’t remember, and Camille  and Brandi can’t remember, either. Clearly, someone at 90210 has been doing his or her homework, because the dialogue sounds exactly like both women, down to Brandi admitting to “popping a squat in the backyard.” Take a look at the ladies in action:

Brandi and Camille have not been on the best of terms since their tiff in Las Vegas, in which Brandi accused Camille of being part of the set-up at the season two reunion. Brandi alleged that Adrienne Maloof had tried to get Brandi to gang up on Lisa Vanderpump, along with costars Camille and Kyle Richards, an allegation that Camille strongly denied. It’s nice to see the blonde beauties lightening up and having some fun on another show! Watch Brandi and Camille on 90210 tonight on the CW at 9/8c.

Rihanna has a crush on Megan Fox!