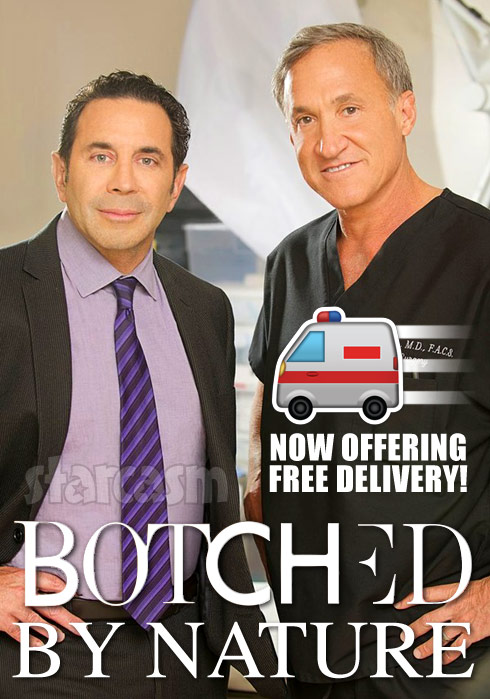 When we named Botched the best new reality series of 2014 we emphasized that it wasn’t so much the patients who have turned their over-the-top elective surgeries into pseudo-careers that made the show special. Instead, it was the patients who needed Dr. Dubrow and Dr. Naaif’s help through no fault of their own. It seems that E! feels the same way, as they have just announced Terry and Paul will be getting a new spin-off series titled Botched By Nature, in which they will be “taking the show on the road and heading cross country to change the lives of those who have been botched by genetics or a traumatic incident.”

That’s right: Terry and Paul are leaving the confines of their posh LA offices and hitting the road! In a wonderful twist inspired by such “surprise makeover” shows as Extreme Makeover: Home Edition, the doctors “will travel to seek their prospective patients, surprising them with the ultimate house call.” From the E! press release:

The doctors will embed themselves in their patients’ lives to understand the physical and psychological scope of the situation. From disproportionate body parts to birth defects to major life accidents, the doctors will weigh the possible risks and benefits and invite patients to Los Angeles to embark on the ultimate cosmetic transformation.

“We are excited to build on the mega- success of the Botched franchise with Botched By Nature,” said Jeff Olde, EVP, Programming and Development, E! “Dr. Dubrow and Dr. Nassif will continue to inspire viewers as they transform the lives of patients who are brave enough to share their stories.”

Oh, man, can you imagine being in dire need of cosmetic surgery without the means to have it done, only to have Dr. Terry Dubrow and Dr. Paul Nassif show up at your door step?! Talk about “You may already be a winner!”

I hope we actually get some Paul & Terry road trip footage similar to Nev and Max from Catfish. 🙂

The first season of Botched By Nature will have eight one-hour episodes. The premiere date has not been announced.

In honor of the big announcement, I thought I might dedicate one of the greatest traveling male duo songs ever written that includes either the name Paul or Terry:

Botched’s Katella wants to look like a blowup doll