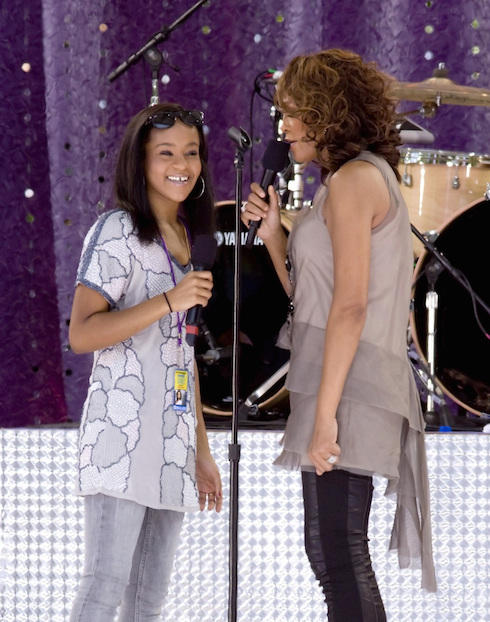 According to multiple reports in the wake of the 22-year-old’s passing, the Bobbi Kristina funeral was originally scheduled to happen this Saturday, August 1st, in Atlanta. From there, Bobbi Kristina’s body was to fly to New Jersey, courtesy of family friend Tyler Perry’s private jet, and be interred on the same plot of land as her mother, Whitney Houston.

However, “both sides [of the family] are still not happy and on the same page,” says a source close to the situation. “There is a lot going on behind the scenes. There is a lot to do in a very short time.”

Overall, though, “Things are constantly changing.” And, unfortunately, old tensions are emerging.

The long-standing feud between Leolah Brown and Pat Houston appears to be a major source of the conflict regarding the Bobbi Kristina funeral. Leolah’s most recent Facebook posts have taken Pat to task over reports that the Houston family member “is asking for the public to send money to her foundation (The Marion P Foundation) on behalf of my niece Bobbi Kristina.”

[Pat] is not the sweet quiet person that she “tried” so hard to make people believe she was on the Oprah show. She would like the public to think that.. but she is very good and polished on keeping her composure when she is under the microscope. I know her upbringing and how she was raised-trust me. Whitney and I spoke on this on many occasions-so don’t let her fool you. Although she is being quiet, she is indeed heated right now! Because her world is tumbling down! Yes, shes quiet without saying a word. But, believe me it’s not because she does not know I am revealing her […] she not only knows that I AM SPEAKING TRUTH-but she is aware that her day has come! And not only that! The truth is being exposed by a BROWN! And she would have never thought in a million years it would come like this. She is actually in shock right now:) because a Brown is usually silent.

Whitney Houston’s gravesite is located in Westfield NJ. The plot was prepared for Bobbi Kristina’s body earlier this month; it’s believed that her coffin will ultimately be placed atop her mother’s, as the space is not wide enough to accomodate two bodies side-by-side.