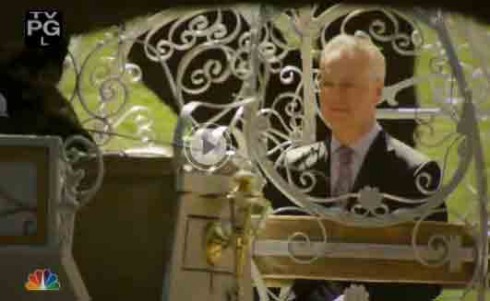 This year, the producers of the Biggest Loser know we know they know that it is makeover week, so there’s no need to be coy. Rather than linger on “before” pics and walk us step by step through the makeover process, they get right to it.

The episode opens with Tim Gunn approaching the remaining five contestants in Cinderella’s horse-drawn carriage. Everyone is thrilled to see his fabulousness roll onto the ranch, but none more than Olivia, who is visibly moved.

After the hugs and greetings, Tim Gunn explains to the contestants that he is their fairy godfather (didn’t we already know that?) and that he would grant each of them three wishes. The first wish was a make over, the other two would have to remain a mystery. Soon, only a few minutes into the episode, the makeover reveals are happening, and it is clear that they are not going to be the centerpiece of this week’s episode.

Hannah comes out first, and I’m not so sure about her blonde bangs and mermaid dress; but, she radiates confidence and happiness, and before too long it doesn’t much matter that it looks like she should be breaking into “Part of Your World” and pining over Prince Eric. She’s met by her second wish—her father—at the top of a flower-lined stairwell up to an odd Medieval Times looking castle, and he is as sweet as he is corny in his gushing praise.

A blonde Irene is next, and I can’t help but wonder whether stylist Ken Paves is getting kickbacks from the bleach company. When her fellow-contestant mother, Ana, meets her at the top of the stairs, two things hit me: (1) was she really on the show, because I don’t remember anything about her and (2) omg, Irene looks just like her! Did they look that much alike at the beginning of the season? Ana has lost 79 lbs. on her own at home, so maybe that’s why she doesn’t bring any clear memories to mind. Maybe.

Austin’s next, and his transformation isn’t radical. He looks good. His hair’s shorter. His tux pleats sit nicely. He talks to Tim about swagger and owning his outfit, and we can see that, I guess, but it seems like he’s talking himself into it. (Maybe we’re just bitter about him keeping his love life to himself for so long. Doesn’t he know he’s a reality tv personality, now? It is past time to fess up.)

When Olivia comes out, I see my first sign of makeover genius. She looks wonderful in her short dark hair and gorgeous deep blue gown. When she talks to Tim about the opera witches that she used to play and the leading lady parts she’s looking forward to playing, we can believe her. Her confidence (unlike Austin’s) seems calm and authentic.

Jay’s the last to come out, and he looks really good, too. Tim says that he looks like the “most distinguished man ever,” and that’s too much; but Jay looks like a man who knows his mind and controls his destiny. Next to Olivia, we’d have to say that his transformation is the most impressive; and, that’s not too bad for the only old guy left on the ranch.

There was a bit of a challenge in the middle of tonight’s one-hour episode; but, it was a fairly lame excuse for a competition. Olivia, Hannah, Jay, Austin, and Irene had to dig a box out of one of 50 car-shaped sand castles, pull a key out of the box, jog half a mile down a pier to two new Mazda 5’s, and try the key. If the key worked, the car was theirs; if it didn’t, they had to jog back, rinse, and repeat. Irene won a car after only two laps; an hour and forty-five minutes later, Olivia won the other car. Not much drama in this one.

The last-chance workout montage was even more half-hearted than the challenge. It seems pretty clear that the folks putting these shows together don’t really know how to produce a balanced 42 minutes. Everything seems a little rushed or, worse, a little thin.

The weigh in began with Hannah, whose newly highlighted hair looks much better straightened and pulled back from her face. She only pulled 2 lbs (for 94 lbs. total, so far, and now she weighs a willowy 154; but no one seems to think this is going to be enough to keep her above the yellow line.

Jay’s next, and his makeover seems to have stuck. He doesn’t look glamorous, but he also doesn’t look fat. He looks like a normal middle-aged bald dude with a nice smile. The scales beep and we go to commercial with a disgusted scowl on his face. After the break (and the 845th commercial for the Voice) we see that Jay has only lost 3 lbs. is now down to 255. Jillian says he seems like a different person since he’s come back to the ranch, and that she will commit herself to helping him figure things out if he’s still here next week.

Austin’s next, and he’s the biggest loser this week by far with a -7. He’s down to 243, now, and has lost a total of 160 lbs. Blonde Irene comes up and shows us a -2. She’s 152, now, and it is enough to keep her above the yellow line; but it puts Jay below. And, in the break away interview, he seems resolved to go home.

Olivia is next on the scale. Despite the greatness of her hair at the make-over reveal, she doesn’t seem to know what to do with it. It is swept off her face from a part much too close to her ear, and she looks a little bit like Cindy-Lou Who without the braids. She needs 1 lb. to hit the 100 lb. mark and she loses 4 (which puts her at 158 lbs); but her loss is her sister Hannah’s . . .um . . . loss, when she pushes her below the yellow line. Jay’s really the vulnerable one, here, though, and you can see in his eyes that he knows it.

Tim Gunn’s voice comes out of nowhere, and Allison’s transparently false surprise reminds us that she is, after all, a soap opera actress. Then Tim appears on one of the weigh-in monitors to let us know that his third fairy godfather wish is to erase the yellow line. (We wonder if the cars would have been the 3rd wish if Rulon hadn’t walked off the show last week.) No one is going home. Everyone does the happy, happy, joy, joy dance.

Then, Olivia keeps her promise to sing an operatic aria from the Biggest Loser scale when she loses 100 lbs. The last few minutes of the show are genuinely weird. Everyone is talking about how amazing Olivia is. Bob is shown tearing up and saying that he’s never been so moved at a weigh in before. Hannah is so pumped with sisterly pride that she almost looks plump again. But, here’s the thing—they’re talking over Olivia’s singing. You can hardly hear a thing. They keep cutting away from the vocals to do the voice over, and you only get about 4 decent seconds of her singing.

I guess the BL folks thought the audience couldn’t stand 60 seconds of culture. I, for one, am insulted.