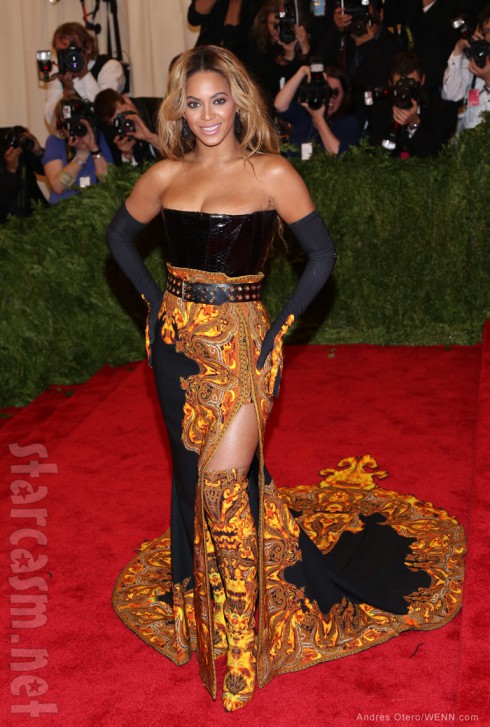 The “confirmation” comes after two weeks of fevered speculation online and in the media. Rumors that Beyonce might be expecting her second child began to swirl after the singer wore a custom-made high-waisted Givenchy gown (above) to the “PUNK: Chaos to Couture” Costume Institute MET Gala on May 6, which in addition to the high waistline, featured an intricate (and concealing) fiery paisley-esque pattern. The New York Post backed up the rumors by claiming on Monday to have several sources who told them after the MET Gala that Beyonce is in fact pregnant again.

Then, on Tuesday, Beyonce postponed her Mrs. Carter Tour concert in Antwerp, Belgium with her rep stating Beyonce “has been advised by her doctors to rest as a result of dehydration and exhaustion.” (It was announced earlier on the tour that Beyonce would not be allowing professional photographers not approved by her to take pictures during the tour, which at the time seemed ot be because of the unflattering shots that emerged online after her Super Bowl halftime performance, but in retrospect it seems to make perfect sense if she is trying to hide being pregnant.) Of course that whipped everyone into a pregnancy rumor furor!

And now we have E! News confirming the pregnancy! Actually, I’m not sure that’s really all that much of a “confirmation” per se. I guess we could have published a similar story: “Multiple sources close to Starcasm confirm that Beyonce is in fact pregnant!” It’s just playin’ the odds, right? 😉

Even so, everything seems to point to Blue Ivy getting a little sibling within the next 9 months! With that being said, I’d like to make our suggestion for the little guy or gal’s name…

You heard it here first!