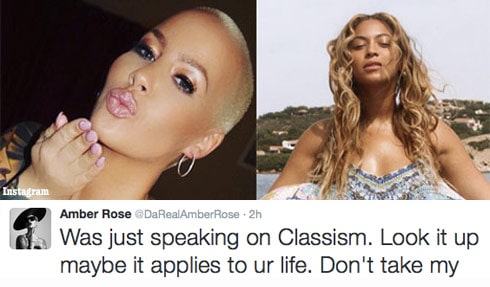 Amber Rose has tweeted a clarification of her recent comments regarding Beyoncé after the singer’s fan-army, known as the “Beyhive,” let her have it.

In an interview posted today with the Daily Beast, Rose was asked about her position of support for Kim Kardashian following her controversial nude selfie. Rose had put P!nk on blast for being a Debbie Downer about Kim K’s share, writing in part, “D**n Pink we were all born naked society sexualizes our breast and bodies. If a grown mother of 2 is comfortable with her body and wants to show it off that’s none of ur business or anyone else’s.”

Here’s what Rose had to say about the topic to DB:

If we could sing, it would be OK if we were on stage half-naked. We all love Beyoncé, but she’s on stage half-naked and twerking all the time, yet people say, ‘Oh, she has talent so she’s able to do that.’ We don’t have the talent that Beyoncé has, so we get criticized as former sex workers, but at the end of the day we’re just women — we’re all women — and we should all embrace each other.

Amber knows the drill, so, after getting the full sting from the Beyhive, she had the following to say:

Was just speaking on Classism. Look it up maybe it applies to ur life. Don’t take my words out of context ? I cried twice when I met her Lol

Wait y’all not about to ??? Muva Lol When I’m apart of the Beyhive! TF? I mentioned her cuz she is the most talented and beautiful…..

Rose also highlighted what she sees as a double standard for men and women. “No one gives a f*** that Channing Tatum was a stripper,” she pointed out. “He’s an established actor who’s at the Vanity Fair parties and the Oscars, but for me, no matter how far I go in my life, I see these stories that keep referring to me as a ‘former stripper.’ No one says ‘former stripper’ about Channing Tatum, or ‘former McDonald’s worker’ about Brad Pitt.”