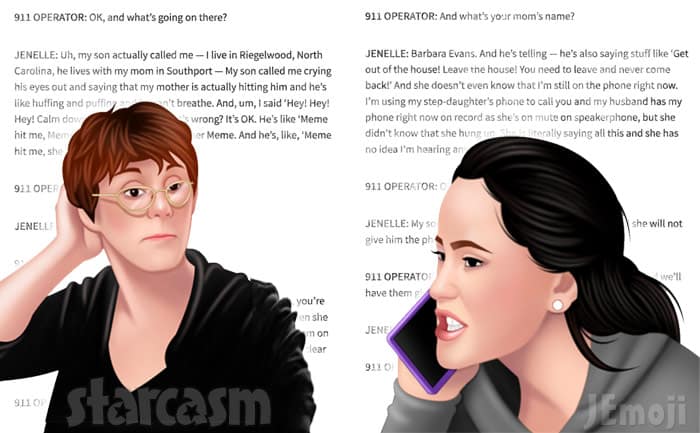 The accusations continue to fly between Teen Mom 2 star Jenelle Eason and her mother Barbara Evans. In the latest altercation between the estranged mother and daughter, Jenelle calls 911 after she says she received a call from Jace in which he says Barbara is hitting him as he is “huffing and puffing” and “can’t breathe.”

In the call, which was placed by Jenelle on November 30 and released to the media this week, you can hear a rather frantic Jenelle explain the rather complicated situation to the 911 operator — which I will try to summarize before sharing the actual audio and a complete transcript of the call.

Jenelle says that Jace called her from Barbara’s house crying, claiming that Barbara was hitting him. Barbara saw Jace talking to Jenelle and took the phone away, but unknowingly did not hang up. Jenelle placed the call on speaker phone and muted her side so they could hear what was going on. As the original conversation remained on muted speaker phone and was being recorded, Jenelle used her step-daughter Maryssa’s phone to call 911.

Jenelle says that Barbara was unaware that the phone conversation had not ended and that Jace could be heard “screaming for [Jenelle] in the background.”

Police in Brunswick County, where Barbara lives, were notified and a police report was filed with a brief account of Jenelle’s accusations. However, the report summary states “No need to check.” It’s unclear if officers spoke with Barbara or Jace before reaching that conclusion.

Here is the audio followed by a complete transcript of the call.

VIDEO Chelsea Houska’s daughter Aubree digs Cole’s wedding ring, and so do we