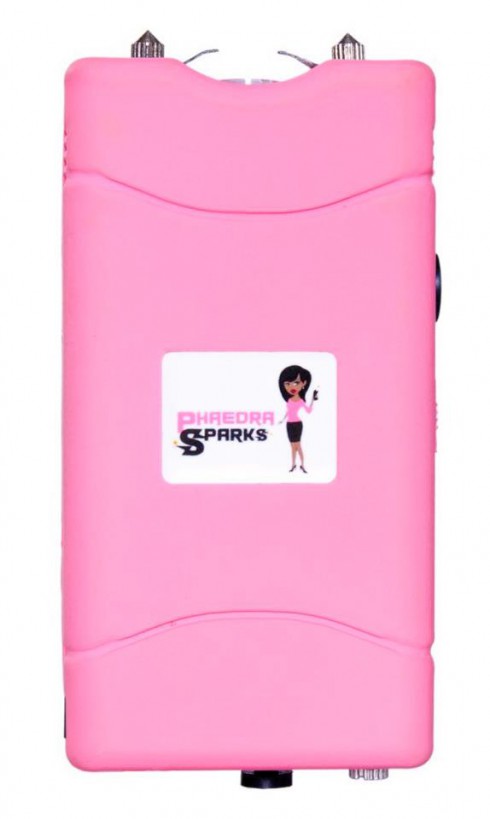 On tonight’s episode of The Real Housewives of Atlanta Phaedra Parks proudly stated, “any smart business woman is always expanding her empire, and now that my Donkey Booty DVD is ‘behind’ me, now I’m venturing into the world of stun guns!”

So how in the world did this Bravontrepreneur go from funeral home director to workout DVD instructor, to electroshock weaponry? “The stun gun I had was a little bulky and not very feminine, so it’s a natural fit for me to design something for the ladies. And I have the perfect name for my stun gun: Phaedra Sparks.”

Above is a photo of the Phaedra Parks “Phaedra Sparks” stun gun and here is the information on it from Phaedra’s website:

Phaedra Sparks pink stun gun includes a light travel case, as well as the original safety pin for the proper use of the stun gun.

Phaedra Sparks, a stun gun by Phaedra Parks of Real Housewives of Atlanta, is a pink stun gun including a light travel case, as well as the original safety pin for the proper use of the stun gun. The safety pin prevents a potential attacker from taking the stun gun from you and using it to cause you harm. Personal Security in the Palm of Your Hand! This compact stun gun is about the size of a pack of cigarettes-but packs an astonishing 8 million volts of stopping power!

Kandi Burruss went with Phaedra to try out the stun gun with Divas In Defense and she commented on the similarities of their business ventures. “Phaedra and I have both launched products that are electric and are marketed to adults. But hers is the gift of pain. Mine is the gift of pleasure.”

Phaedra then joked, “Well there is a thin line between pain and pleasure.” (Everybody knows Phaedra’s freak number is off the charts!)