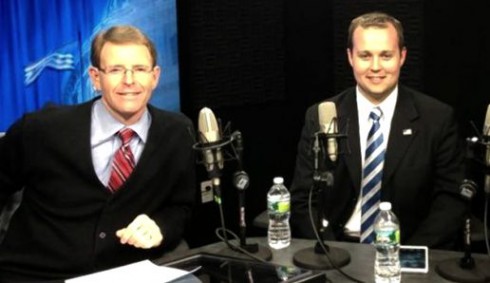 Is one sin worse than the other? The language Josh Duggar’s former employer, Tony Perkins (pictured) of the Family Research Council, used when making statements about how Josh molested five underage girls as a teenager stands in stark contrast to the tone of the FRC’s statement after Josh’s adultery was revealed.

When Josh resigned from FRC Action in May amidst the molestation revelations, a spokesperson for the “Pro-Family and Pro-Life” organization simply said in a statement that they hadn’t known about “events that occurred during his teenage years.” Explaining it was Josh’s decision to resign, the spokesperson added, “We believe this is the best decision for Josh and his family at this time. We will be praying for everyone involved.”

Notice there was no specific mention of the reason Josh resigned or the FRC’s stance on the crimes. Now compare that to the FRC’s new statement about Josh’s confession he cheated on wife Anna Duggar…

We are grieved by Josh’s conduct and the devastating impact of his pornography addiction and marital unfaithfulness. Our hearts hurt for his family, and all those affected by Josh’s actions. His deceitful behavior harms his family, his friends, his former coworkers, and the cause he has publicly espoused. Those of us who advocate for family values in the public square are held to a higher standard, and Josh’s failures serve as a painful reminder of the destructive effects of not living with integrity. We are praying for the family.

Unlike with the first statement, there is specific talk of “Josh’s failures” and “deceitful behavior.” So, why is the FRC now turning its back on Josh? It may be because they — and many of Josh’s other former supporters — wanted to believe he changed in the years since he molested the young women, which is what Josh told everyone. But now those supporters are faced with the uncomfortable truth that he continued to live a “double life.”

“They just don’t know who this person is who could have done this,” a source said. “It’s like he’s a completely different person from who they thought he was, and they’re still trying to reconcile all that they know is good about Josh, whom they will always love and adore, with what they’ve learned now.”