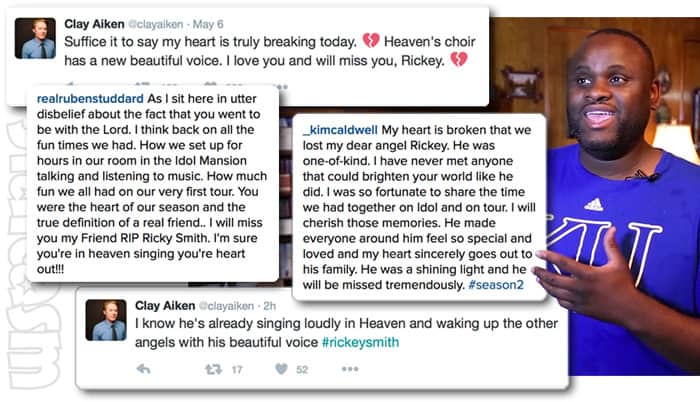 American Idol finalist Rickey Smith died early Friday morning after being hit head on by another vehicle going the wrong way on Interstate 240 near Oklahoma City. The driver of the other vehicle has been hospitalized and booked for DUI.

After police revealed that Rickey Smith was the one had died in the accident, many of his American Idol Season 2 co-competitors took to social media to express their grief and condolences to Rickey’s friends and family, including winner Ruben Studdard, second place finisher Clay Aiken, third place finisher Kimberley Locke, and Rickey’s Top 8 co-finalist Kim Caldwell.

Before we get to those messages, I wanted to point out that Rickey has two children and a GoFundMe page has been started to raise money for them. The initial goal on the page was $10,000, and that goal has already been met — which is a real indication just was a caring spirit Rickey was. Here is the message from the page:

Rickey Smith has touched the lives of all those who he encountered. This man was truly one of a kind in which his generosity, humble heart, infectious laugh, and astounding voice will not be forgotten in all of our hearts. Every person he came across in his years with us has a story of how he changed their life.

We are friends of Rickey and his family from Oklahoma City. This fund is being set up in honor of our great friend to offer support to those he loved so emphatically. The funds will contribute to the costs associated with funeral arrangements and specifically to help alleviate accruing costs during this time for Rickey’s family, girlfriend, and little daughter.

All money donated will be directly given to Rickey’s immediate family.

We love you our sweet friend, until we see you again.

Now I will let Rickey’s American Idol friends speak about his passing:

As I sit here in utter disbelief about the fact that you went to be with the Lord. I think back on all the fun times we had. How we set up for hours in our room in the Idol Mansion talking and listening to music. How much fun we all had on our very first tour. You were the heart of our season and the true definition of a real friend.. I will miss you my Friend RIP Ricky Smith. I'm sure you're in heaven singing you're heart out!!!

Man I just can't seem to stop thinking about my homie. This is a tuff one right here.. #riprickeysmith …

Suffice it to say my heart is truly breaking today. ? Heaven's choir has a new beautiful voice. I love you and will miss you, Rickey. ?

"The energy, the voice, the enthusiasm which we will never ever forget." – @ryanseacrest #rickeysmith https://t.co/rfomLidb4H

My heart is broken that we lost my dear angel Rickey. He was one-of-kind. I have never met anyone that could brighten your world like he did. I was so fortunate to share the time we had together on Idol and on tour. I will cherish those memories. He made everyone around him feel so special and loved and my heart sincerely goes out to his family. He was a shining light and he will be missed tremendously. #season2

I'm shocked & deeply saddened by the tragic passing of Rickey Smith. I send my sincerest condolences to his family. pic.twitter.com/YWDiplKOhh

How sad that Rickey Smith's talented life was taken by a #drunkdriver. He was part of the #AmericanIdolFamily and will always be remembered.

Keep singing it in Heaven , Rickey. "What the World Needs Now is Love Sweet Love." pic.twitter.com/zXXvBwpBDC

Retweet this to as many people as you can. Rickey was such a light to all of us that knew him. https://t.co/RGh4ORW1B9