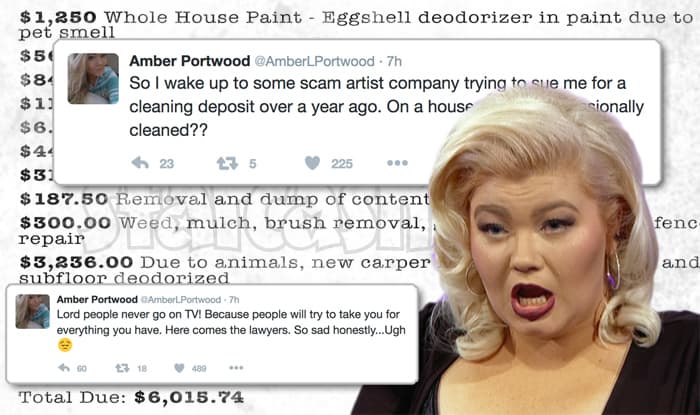 Viewers of Teen Mom OG are well aware that Amber Portwood and fiance Matt Baier have a LOT of cats and dogs. Someone else that is well aware of how many pets they have is Amber and Matt’s former landlord, who is suing the couple for $6,000 in damages — most of which were due to the cost of removing “nasty” pet odors from the carpet, subfloor and walls!

More on the alleged damages and repairs from The Daily Mail:

The costs of repairing the house included installing new “deodorized” carpets, the removal of all the things she left behind, dry wall damage repair, new door knobs, cleaning fees and new coats of “deodorized” paint to mask the smell of her pets.

Amber took to Twitter to respond to the lawsuit, which she apparently found out about just after waking up earlier today:

So I wake up to some scam artist company trying to sue me for a cleaning deposit over a year ago. On a house we had professionally cleaned??

Lord people never go on TV! Because people will try to take you for everything you have. Here comes the lawyers. So sad honestly…Ugh?

The scam artist company that Amber is referring to is Zuluscape, a property management company located in Indianapolis. According to the court documents posted by The Daily Mail, Amber and Matt’s landlord was Betty Snyder, who is listed as Zuluscape’s Property Management Director. It should be noted that the court documents state that a debt collection agency is involved.

Also causing a stir on some of the Teen Mom forums is the fact that Matt is listed as Matthew Balen in the suit. Some folks assume this is Matt using yet another alias (remember Grey Baker?), but Balen seems like a very logical typo for Baier because an “i” can look like and “l” and a “r” can resemble an “n.” That being said, it is odd that Matt’s name would be misspelled when all it would take is two clicks on Google to get it right.

Here is a break down of the expenses for the repairs that Zuluscape claims were needed on the property after Amber and Matt’s departure:

The suit was filed on January 11 with the first hearing scheduled for February. Although Amber was clearly defiant in her Twitter response, it is unclear if she plans to fight the lawsuit.

Fans of Teen Mom might recall the subject of Matt and Amber’s pets’ potential property problems coming up before. No, I’m not talking about the scene from last season in which one of their dogs decided to mark an MTV crew member’s leg as his or her territory — I’m talking about the explosive Reunion Special With Dr. Drew when Amber was explaining why she was no longer friends with Farrah Abraham.

“She just decided to do an interview saying something around that something about how it’s good that Leah is with Gary, and how my house probably smells like p!ss — because of my dogs that I rescued,” Amber explains to Dr. Drew. “By the way, they are all rescues, because I love animals,” Amber adds.

UPDATE – Amber has continued to respond to the lawsuit on Twitter. “One thing I don’t respect is people scamming me for my money a year after almost…It’s really ridiculous anymore,” she wrote. “And to bring g my animals in it is absolutely ridiculous. My home was always clean,” Amber insists, “You can see it on the show except for a few accidents.”

And then there was this interaction with other Twitter users about the amount of time that passed before the lawsuit was filed:

TWEETER 1: a year ago… nothing will come of it,or they would came after you right away.

TWEETER 2: They did. She’s leaving pieces of the story out these big bad tweets. Attempts were made for a year. When attempts were made, no response. Standard procedure is court involvement after certain time passes.

AMBER: And they can keep on complaining because they are not getting a dime! Scam for money…Sad! Point blank

AMBER: So there’s my big bad tweet. Have a great day?

TWEETER 3: landlords would file just as soon as repairs are done. Not a year later.

TWEETER 2: Actually no. Attempts are made to solve it rationally out of court. Then collections is called, THEN court. When tenant refuses communication, the whole process can take at least a year. She had plenty of chances.

Radar Online spoke to Amber Portwood’s neighbor, who “Tells All” about her alleged “House of Horrors,” according to their headline. “She was quiet, to be honest with you,” the neighbor said. “She rarely came out of the house!” (So Amber had a house full of pets and was quiet and rarely came out.)

The neighbor later added that the property has already been rented again. “Someone else is living in there,” he says. This revelation was included in the court documents, which indicated the home was rented again on July 1 — but only after all of the addition cleaning and repairs were done.