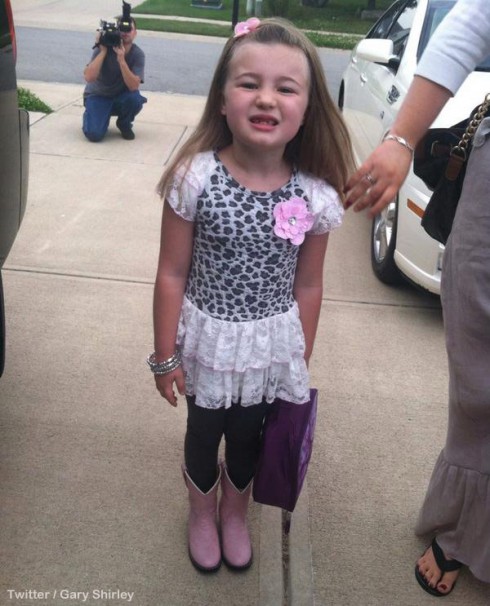 Earlier this week, exes Amber Portwood and Gary Shirley reunited to celebrate daughter Leah’s first day of Kindergarten. It looked to be a happy (if bittersweet) event for everyone. Gary even posted a picture of Amber while they were running some errands.

The next day, however, Radar Online reported the parents argued during the event.

“Gary and Amber seemed to be having a heated conversation near the car,” someone told Radar. “Amber had her arm crossed [sic]. She definitely didn’t look happy.”

The “onlooker” speculated the drama had something to do with Gary’s ex-girlfriend Kristina Anderson, who was at the event with her daughter, Karly.

“It seemed like there had just been some sort of confrontation,” said the source, adding Kristina was crying on a nearby bench. “Now that Leah and Karly are going to the same school, I hope there won’t be constant drama between the parents!”

Shortly after the story was published, Amber took to Twitter to address it all…

Me and @ItsGaryTime are not together and me and his girlfriend never got into a fight so whoever sold this story is ignorant..sending love♡

She later responded to a person’s question about whether she and Gary are getting along by saying they mostly do. If and when they have a disagreement, she said they “keep it away from Leah.” Gary also advised his followers not to believe everything they hear.

We’ll likely know what really happened during an upcoming Teen Mom special, considering a camera crew was with them at the Kindergarten event.