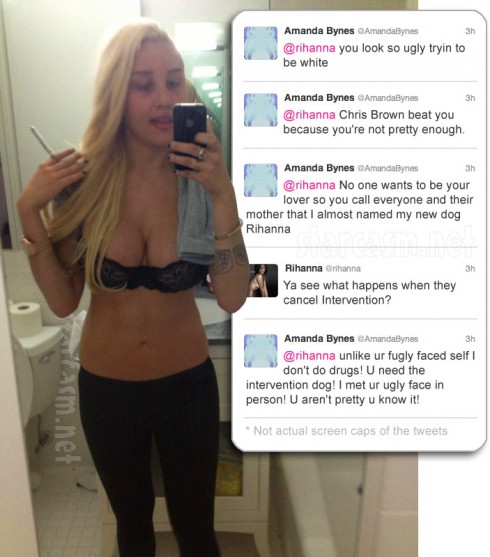 Amanda Bynes continues her attempts to debunk reports that she is mentally unstable by acting completely mentally unstable on Twitter. In the latest edition of Train Wreck Daily Amanda tells Rihanna that “Chris Brown beat you because you’re not pretty enough” and says she is suing her parents “for money laundering/unethical manager work” and adds that she “would rather them be homeless than live off of my money.”

Amanda’s attacks on Rihanna (which have since been deleted) wre seemingly out of the blue and completely random. They started with Amanda’s tweet, “@rihanna you look so ugly tryin to be white.” That was followed by “@rihanna Chris Brown beat you because you’re not pretty enough.” Amanda then added, “@rihanna no one wants to be your lover so you call everyone and their mother that I almost named my dog Rihanna.”

Here are screen caps of her tweets:

Rihanna responded to Bynes with the immaculate zinger, “Ya see what happens when they cancel Intervention?” (Her tweet was in reference to A&E’s recent announcement that they were canceling their ground-breaking addiction reality series Intervention after this season.)

Amanda has also spent a great deal of time replying to articles written about her recent antics including her claims that there was never a bong in her apartment, she doesn’t do drugs, and the police officer who arrested her sexually assaulted her by “slapping her vagina.”

E! Online decided to take Amanda’s statements from the last couple months and break them down as to whether or not they are likely true or false. Amanda responds by making the job of The Soup‘s Joel McHale this week that much easier:

“@eonline: Amanda Bynes: Two Truths and (Probably) a Lie http://eonli.ne/1aiOYrO” this is all false! Nothing was thrown out the widow! They asked if a vase was a bong to which I replied, no, that’s a vase. I’m very close friends with Nikki Blonsky, we chat all the time! Stop writing pathetic articles about me! E isn’t run by beauty queens like me! I’ve met you all! You’re a bunch of drug users and alcoholics! I don’t drink or do drugs! Get your story straight!

TMZ did a post about the fact that at this point Amanda Bynes “is not 5150 material, meaning she can’t be picked up against her will and held for mental evaluation,” and adds that her parents reportedly want to “create an involuntary conservatorship, similar to Britney Spears, but Amanda’s conduct is not so over the line that a judge would take away her freedom.” Amanda responds to that article by making her feelings about her parents very clear, writing “We are no longer on speaking terms. I would rather them be homeless than live off of my money.” She also reveals that her attorney (if he/she exists) is going to be very busy over the next year or so:

“@TMZ: Amanda Bynes — Not Certifiable … and It’s a Big Problem http://tmz.me/Zk8xAH” to say I wasn’t offended being treated like a mental insane person/criminal on the night the cops illegally entered my apartment, found nothing, sexually assaulted me, then arrested me taking me to a mental hospital, then locking me up all night for no wrong doing us criminal on THEIR part. My lawyer and I are taking this mistake extremely seriously! You cannot illegally enter my apartment then take me to mental hospital without any grounds. I have never been so offended in my life. They found nothing criminal on me or around me, one cop then sexually assaulted me, so I’m suing for all of the above! I’ll be happy when I get money compensation from the cop who assaulted me and NYPD for wrongfully arresting me and having me put into a mental hospital and jail overnight! I don’t want to keep talking about it. My lawyer is taking care of it for me. My real friends don’t talk about me on twitter. Also, never trust or listen to a word any person from my family says to the press. I am suing them for money laundering/unethical manager work, I never signed a contract with them, and they had been stealing my money without me knowing, claiming they were managing me somehow when they have no right to act as if they did anything to help or enhance my career and I want $ back that I earned on my own. I’m 27 and don’t like when press talks to my parents. My parents are almost 70 years old. We are no longer on speaking terms. I would rather them be homeless than live off of my money.

Amanda Bynes also responded again to last week’s “Drug-Fueled House Party” article in In Touch that included alleged photos of her partying inside her apartment. In case you missed it, here are the photos from In Touch followed by Amanda’s previous reactions and then her additional response from earlier today:

Amanda’s responses over the last week:

That’s not my bed! Those aren’t my toes! My toes are pedicured! I just did an exclusive interview with intouch last week, now they bought fake altered photos by that ugly black man in the photo or someone who knows him! They used an old shot of me on the cover with a bad angle of my old nose before I had surgery to reshape my profile and to remove the webbing from my eyes. I have to sue because that’s not my apartment, those aren’t my clothes! They morphed photos of my face onto someone’s body to ruin my life! I have to make a big deal of this and sue because that’s not me! I care about my appearance so I have to defend myself! I look like a different person now that I had surgery! Why did they put an old shot of me on the cover? I don’t look like that anymore! I only want photos of my gorgeous new nose on the cover of tabloids and real magazines! The photos in this issue are fake and mocked up! I don’t care enough to keep talking about it. Just assume that I f***ed the boyfriend of the editor of intouch because they f***ing hate me!

This ugly faced woman @JessicaFinnNYC is the one who bought fake photos of me & put that picture that looks nothing like me on the cover!

[To Perez Hilton] The only thing sadder than your ugly face still writing stories about me is the fact that you think I’d even step foot in a room with that ugly faced black man.

In Touch responded with this statement:

The photos of Amanda Bynes inside this week’s issue of In Touch speak for themselves. We at In Touch have done our due diligence and research on the photos and the article that accompanies them.

In Touch has not altered or photoshopped these photos in any way. Additionally, the photographer has assured In Touch that these photos of Amanda were not altered or photoshopped in any way prior to the magazine obtaining them and they are, in fact, of Amanda Bynes taken at Amanda’s apartment in New York City. All of Amanda’s claims pertaining to the photos in this week’s In Touch are false.

@Logosi32 I’ve never met him! They superimposed my face onto someone else’s body! I’m suing!

And here are some more of Amanda’s reactions to various articles about her online from today and yesterday:

abcnews.go.com/blogs/entertai… The cops entered immediately upon knocking! I was sexually assaulted! I called the cops while they were in the room!

news.yahoo.com/amanda-bynes-f… I’ve never met this person in my life. Don’t believe anything you read about me unless I confirm it on twitter.