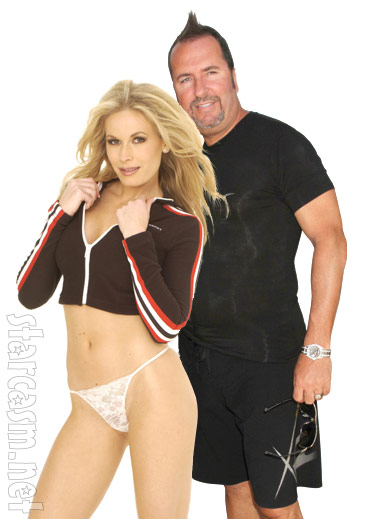 On last night’s episode of Watch What Happens Live Andy Cohen thought the biggest news bombshell that would drop on the show was the fact that Osama Bin Laden had been killed. But, midway through the show guest Alexis Bellino from The Real Housewives of Orange County dropped what many OC fans would consider at least a similarly sized bomb: her husband Jim Bellino used to date new cast member Peggy Tanous!

ANDY: @Queentutor tweeted and said, “I heard Peggy Tanous dated Jim before you, is that why there’s tension between you and Peggy?”

ALEXIS: They did date and…

ALEXIS: Yes, and there was no tension…

ANDY: Whoah! I didn’t know that!

ANDY: Talk about – by the way, BUH-REAKING NEWS everybody! This is breaking news!

ALEXIS: No, I mean. He married me. What can I say?

ANDY: Ooooo, snap! How long were they together?

ALEXIS: I don’t – I didn’t ask details [inaudible]. You can ask them if you want.

ANDY: Oh no, I’m asking Peggy at the reunion.

This was a story we were already working on, but since Alexis actually confirmed it on the show I felt like we show go ahead and run with it. We have a source that was in the same circle of friends as Jim Bellino and Peggy Tyler (Peggy Tanous’ modeling name – see more on that here and here) who says they began dating in 1996 and continued through 1997 before Jim dumped her.

So that means Slade Smiley isn’t the only member of the Multi-OC Club! This sheds a whole new light on the tensions developing between Alexis and Peggy this season!

UPDATE: After a very stressful season together, and fights about lips, Alexis Bellino called into Watch What Happens Live on June 5 while Peggy was a guest. Alexis said she had a lot of “dirt” about Peggy, and talked about photo albums of boyfriends, and pointed out that she was the one who married Jim Bellino.

That set up Peggy for brutally honest response:

Alexis “I married him.”
Peggy “Thank God, because I surely wouldn’t. I’m embarrassed I dated him.” Fist bump with Sean Avery. “We all have those guy we say we didn’t date.”

We’re working on getting more info – and if we do we’ll either update this post or add a new post and add a link below. (If you know anything more about Jim and Peggy’s time together feel free to drop us a line at starcasmtips (at) yahoo.com!

(Just in case you were wondering, YES the top picture was Photoshopped. It is a photo of Jim Bellino from 2010 and Peggy Tanous as Peggy Tyler when she modeled for Bench Warmer pin-up trading cards in 2002.)

Did Tamra Barney give Vicki Gunvalson the evil eye?