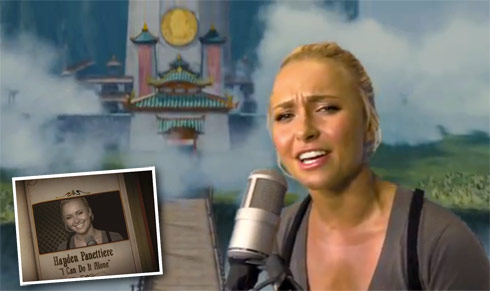 In addition to voicing Red Riding Hood in the film Hoodwinked Too: Hood Vs. Evil, Hayden Panettiere also sings a song in the film titled “I Can Do It Alone,” for which the official video has just been released!

Hayden Panettiere has quietly been building a rather substantial musical resume, mostly sticking to the formula of recording individual songs for movies she stars in. Her moonlighting musical projects include “My Hero Is You” (2004) from her Disney Channel film Tiger Cruise, “I Fly” (2005) from another Disney project she was in titled Ice Princess. The following year she recorded a single for the Hollywood Records compilation Girl Next and in 2007 released “Go To Girl” for the follow-up compilation Girl Next 2.

2007 was a big year for Hayden Panettiere the singer because in addition to “Go To Girl” she also recorded “Cruella De Vil” for DisneyMania 5, “Try” for the Bridge to Terabithia soundtrack and the ballad “I Still Believe” for Cinderella III: A Twist in Time.

Hayden’s first straight-up single that wasn’t attached to a movie or other project was titled “Wake Up Call” and was released August 5, 2008. The Candie’s clothing line picked up the song and used it in their advertising and put out a music video.