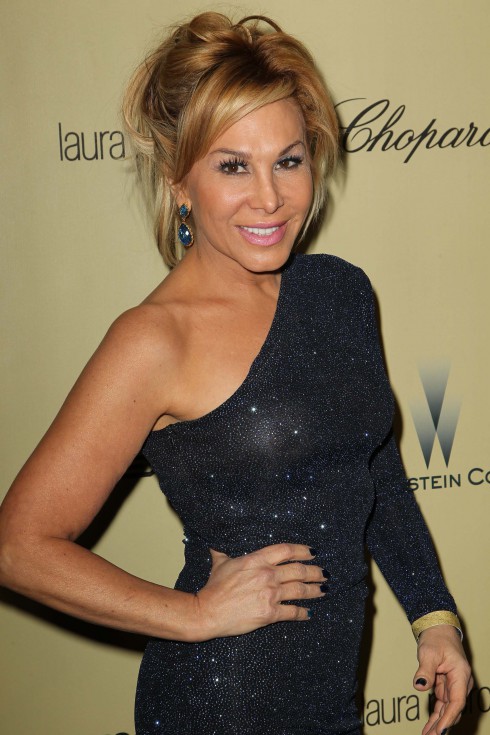 For someone who said she was glad when Lisa Vanderpump moved away, Adrienne Maloof seems to be going out of her way to be neighbors again. This time around, Adrienne is opening up her own restaurant, just blocks away from Lisa Vanderpump. TMZ reports: “Adrienne is telling her business partners her restaurant will blow Villa Blanca away.  In fact, she’s saying on a scale of 1-10 (10 being great), her archrival’s restaurant gets a 2, calling it ‘a disaster.'” Nice. Adrienne already has some experience in the service industry, as her family owns The Palms casino in Las Vegas (although Brandi Glanville claimed that the Maloofs only own 2% of The Palms, on a recent episode of Real Housewives of Beverly Hills). Other brands owned by the Maloofs are the Sacramento Kings, Maloof Productions, Maloof Music, and Maloof Money Cup. The restaurant is rumored to offer “comfort food — steaks, seafood with a Mediterranean twist” and will cater to celebrity clientele, similarly to Lisa’s restaurants, Villa Blanca and Sur.

This news comes after Adrienne announced that she is leaving the hit reality show; whether or not she is leaving of her own accord or was fired is unclear. Adrienne issued the following statement on her website regarding her departure: “To my loyal fans… It was time to exit RHOBH. The show served as a wonderful platform for all the amazing projects that I have in the works.  I am forever grateful to my fans, thank you for your support, and stay tuned! xoxoA.”

Adrienne called quitting the show “a big relief;” she told TMZ to “stay tuned” for her latest projects, which allegedly include the her new restaurant. However, other sources are saying Adrienne did not quit but was fired; Fox reports that because Adrienne skipped the reunion for legal reasons (she was supposedly ordered not to talk about her divorce), she was subsequently fired.

Recent reports allege that lawyers in Beverly Hills have been advising their clients to not appear on Real Housewives because of the potential for damage to their reputations. Lisa recently spoke to TMZ about the rumor, saying she doesn’t understand it:

Real Housewives of Beverly Hills is on Mondays at 8/7c on Bravo.