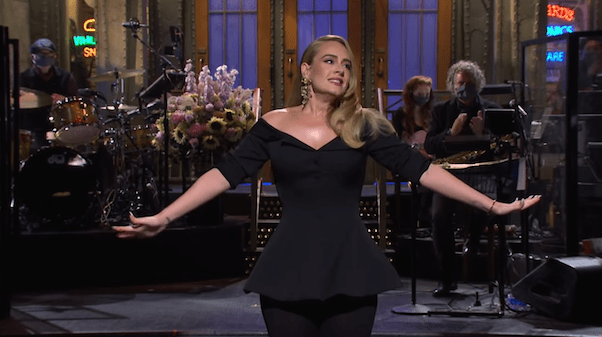 DLISTED – It was always going to be strange to see Adele hosts SNL without actually singing (H.E.R. was the musical guest this week). Everyone and their mother thought this would be Adele’s reveal of her super secret new album, or at least a single. But she acknowledged the gossip by saying the album “isn’t finished,” then wound up singing during a sketch anyway

CELEBITCHY – I’ve lost track of the number of times a woman who only superficially looks like Melania Trump has appeared alongside America’s current president in public. But it’s happened often enough that there’s a big & growing group of people who think the White House employs regular body doubles to pass off as Melania, and it happened again a couple days ago

JEZEBEL – The headline says it all: “Let’s Hear It for the Best Vibrators to Stimulate Your Days at Home”

REALITY TEA – Former Real Housewives of Atlanta star Kim Zolciak-Biermann says that now that her daughter Ariana is 18 and has “her own love of makeup,” the family’s glam budget is at least “a couple thousand dollars a day,” not including wardrobe

VOX – Speaking of posturing: at least five people who work for the Vice President have tested positive for COVID-19. And the VP has been directly exposed to those people. The White House’s response? Send him back out on the campaign trail for maskless rallies

LAINEY GOSSIP – “Finally, 2020 has done something right and given us another season of a great show. Miracle Workers is a vastly underappreciated comedy series starring Daniel Radcliffe, Steve Buscemi, Geraldine Viswanathan, Karan Soni, and Lolly Adefope. The first season is about a group of angels trying to save Earth from a disinterested God, and the second season is set in the Dark Ages. The newest iteration of the show will be set in the Old West, with the cast bumbling their way along the Oregon Trail — here come the ‘you have died of dysentery’ jokes”

THE HOLLYWOOD GOSSIP – Amber Rose is speaking out against her ex Kanye West again, following Kanye’s recent media scuffles with both Kim Kardashian and Kris Jenner. According to Amber, Kanye recently referred to her as a “prostitute” and has been bullying her every chance he gets for a decade