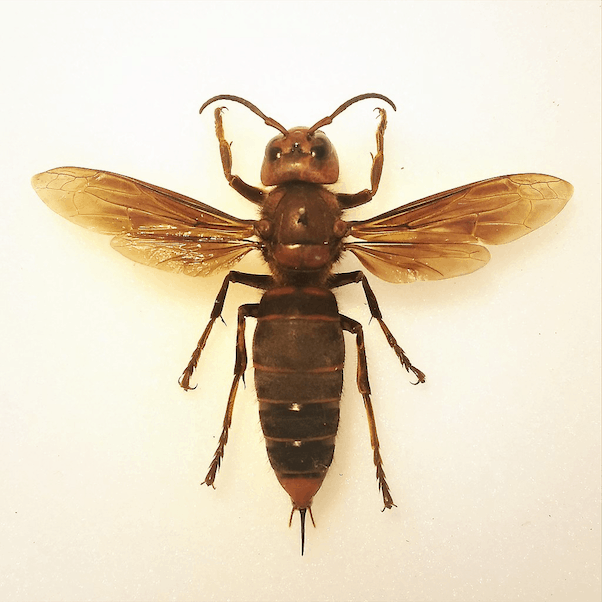 Scientists have found and eliminated the first-ever murder hornet nest established in the United States — that we know of. The Washington state Department of Agriculture announced the fortuitous find and total wipeout with a series of grisly videos involving hundreds of murder hornet corpses stacked upon each other in a vacuum chamber.

It’s a far cry from the wildlife stories we normally see in America. Over here, you’re far more likely to read about the Florida man bit by a cottonmouth snake while trying to kiss it.

Nonetheless, you may recall the viral New York Times story on the murder hornets from earlier this year. (Believe it or not, though it definitely feels like it was years ago, the story was published this past spring.)

That article was most Americans’ introduction to the murder hornet. But the insect has been active — and deadly — in Asia for years.

The American murder hornet nest was restricted to Washington (for now)

The Asian giant hornet, Latin name Vespa mandarinia, made its way to American shores via still-unspecified Asian import sometime in the summer of 2019. So far, all North American murder hornet nests have been found around the greater Vancouver area, including northern Washington.

While murder hornets can kill humans — more on that in a bit — they’re a far greater threat to native bee populations. Though Asian bee colonies have developed defensive maneuvers for dealing with murder hornets, the massive insects can destroy an entire colony of bees, decapitating their victims and leaving thousands of bee corpses in their wake.

Asian bees have adapted by attacking murder hornet scouts en masse. They swarm upon a single victim, often outnumbering it 100 to 1, and contracting the same muscles they use to fly.

This creates tremendous heat, as well as carbon dioxide. The murder hornet scout can withstand neither, and dies without ever leaving the nest and reporting its location to the other hornets.

North American bees, however, don’t know to do this. And scientists have long feared that an unchecked march of murder hornets across the continent would be equivalent to a bee genocide.

Plus, the hornet’s 1/4 inch stinger delivers one of the most painful insect attacks on earth. According to entomologist Masato Ono, the sting of the murder hornet felt “like a hot nail being driven into my leg.”

And the insect’s two-inch-long body makes it the largest hornet in the world.

Having said all that, you can understand why officials in Washington were relieved to have discovered a nest! It seems the invasive species had taken up residence in a hollow tree trunk near Blaine, Washington, about two hours north of Seattle.

In true 2020 fashion, our last video accidentally had several minutes of black screen at the end. Here's what we meant to post of the #AsianGiantHornet nest found in a tree cavity in Whatcom County. pic.twitter.com/f1vO8qxmly

Murder hornets in US: The consequences could be deadly

Beyond the threat to native bee populations, the murder hornet does indeed pose a danger to humans. The bugs kill upwards of three dozen people per year in China.

They also contribute to the yearly insect death toll in Japan. But it appears the country might not keep separate statistics for the murder hornet specifically.

Still, around one to two dozen people die from insect stings in Japan every year. And murder hornets are regularly included on the list of culprits.

The method of murder is particularly gruesome. While one murder hornet sting is excruciatingly painful, the venom isn’t enough to kill a human.

Humans are only killed after multiple stings. And by “multiple,” we mean “almost too many to contemplate.” According to a 2007 study published in Clinical Toxicology, the average number of stings per human killed by murder hornet is a whopping 59.

Fortunately, the Washington state officials were able to clean out every single murder hornet shortly after discovering the nest. It seems the scientists used a high-powered vacuum to suck up every last insect from the tree.

Here’s a video of the murder hornet remnants:

Got ‘em. Vacuumed out several #AsianGiantHornets from a tree cavity near Blaine this morning. Further details will be provided at a press conference on Monday. Staff not available for interviews before then. pic.twitter.com/31kgAUuJd0

And, in case you were wondering what the scientists wore for protection before busting out the old Hoover, we’ve got you covered. Professional photographer Elaine Thompson was on the scene, snapping high-quality pictures of some amazing-looking space suits:

Quite a morning shooting Asian giant hornets and our WA Ag workers taking them out in Blaine. Love those sting-resistant suits they wear! #MurderHornets pic.twitter.com/K2ZmASinUs

It’s not an elegant comparison, and I don’t mean it to sound insulting, but my first thought was that these guys look a lot like the Stay-Puft Marshmallow Man. The NASA setup at the end of E.T. also comes to mind.

Imagine stumbling across this scene in the woods without any idea of what was going on and no knowledge that murder hornets even exist. And then someone told you “No, it’s okay; they’re vacuuming up murder hornets and don’t want to get stung by their hot nail gun stingers.” Maybe it’s no wonder that 2020 will go down as the year of the conspiracy theory.

What kind of doctor is The Little Couple’s Jen Arnold?