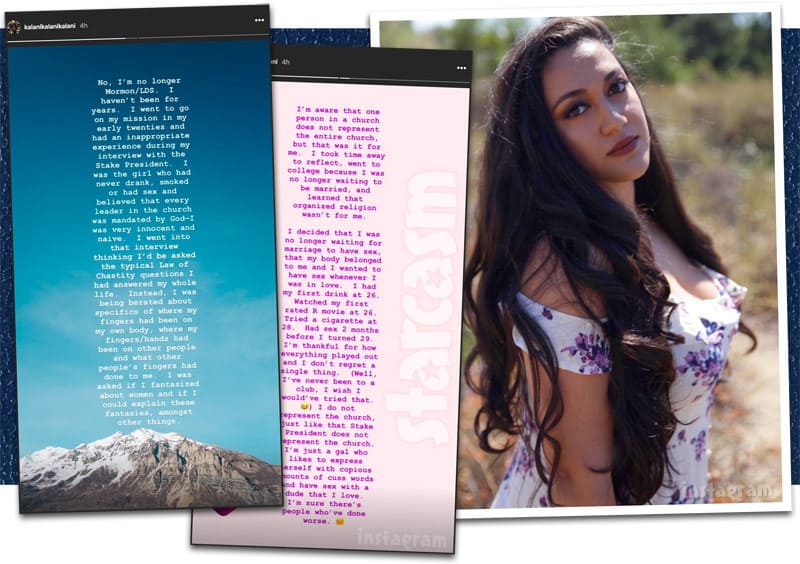 A major part of Kalani Faagata’s story line on the current season of 90 Day Fiance is that her family is Mormon, which created quite a bit of tension when Kalani got pregnant after losing her virginity to her Samoan boyfriend Asuelu Pulaa. Despite her family’s religious ties, Kalani is no longer part of the Mormon Church, and she reveals that she left after an “inappropriate experience” during an interview with a stake president.

“No, I’m no longer Mormon/LDS. I haven’t been for years,” Kalani explains in a two-part text graphic on Instagram.

The 29-year-old Californian then shared details about the moment that caused her to leave the Church of Jesus Christ of Latter-day Saints:

I went to go on my mission in my early twenties and had an inappropriate experience during my interview with the Stake President. I was the girl who had never drank, smoked or had sex and believed that every leader in the church was mandated by God — I was very innocent and naive. I went into that interview thinking I’d be asked the typical Law of Chastity questions I had answered my whole life. Instead, I was being berated about specifics of where my fingers had been on my own body, where my fingers/hands had been on other people and what other people’s fingers had done to me. I was asked if I fantasized about women and if I could explain these fantasies, amongst other things.

Kalani knows that her “inappropriate experience” may not be indicative of others’ experiences, but it was her experience. “I’m aware that one person in a church does not represent the entire church, but that was it for me,” she reveals. “I took time away to reflect, went to college because I was no longer waiting to be married, and learned that organized religion wasn’t for me.”

Deciding to leave the church changed Kalani’s perspective on things, including some of the strict morality she used to adhere to. “I decided that I was no longer waiting for marriage to have sex, that my body belonged to me and I wanted to have sex whenever I was in love,” she says. “I had my first drink at 26. Watched my first rated R movie at 26. Tried a cigarette at 28. Had sex 2 months before I turned 29.”

Despite the number of years spent living by a moral code she no longer completely believed, Kalani has almost no regrets. “I’m thankful for how everything played out and I don’t regret a single thing,” she admits. “Well, I’ve never been to a club, I wish I would’ve tried that,” she clarifies.

Be sure to follow along with Kalani and Asuelu’s love (and lust!) story with new episodes of 90 Day Fiance airing Sunday nights at 8/7 on TLC!