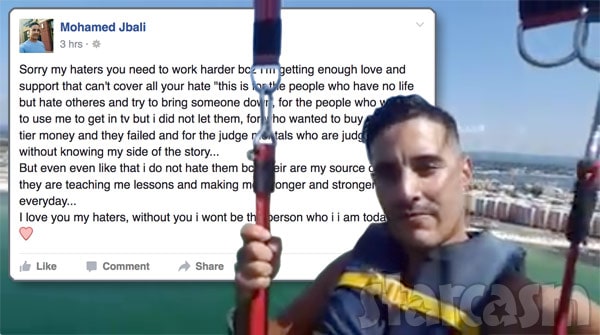 Danielle and Mohamed Jbali have made their less-than-triumphant return to the small screen with TLC’s new spin-off series 90 Day Fiance: Happily Ever After, which documents the couple’s ill-fated relationship after Mohamed got his green card and left Danielle behind in Ohio for a new life in Florida.

After a couple of episodes featuring Danielle and her gal pal playing an emotionally volatile game of Tunisian Where’s Waldo?, Mohamed has taken to Facebook to express his frustration over how he is being portrayed on the show. In addition, he penned a uniquely Mohamedian response to the haters while also addressing the scammers trying to use his identity to solicit money from people online.

First, here is Mohamed’s message to the haters, which he posted earlier today:

Sorry my haters you need to work harder bcz I’m getting enough love and support that can’t cover all your hate “this is for the people who have no life but hate otheres and try to bring someone down, for the people who wanted to use me to get in tv but i did not let them, for who wanted to buy me with tier money and they failed and for the judge mentals who are judging me without knowing my side of the story…

But even even like that i do not hate them bcz their are my source of power, they are teaching me lessons and making me stronger and stronger everyday…

I love you my haters, without you i wont be the person who i i am today ❤❤

The post drew lots of praise from the growing army of mostly female Mohamedites, including my favorite response that begins with: “Very well spoken!!” Ummm… 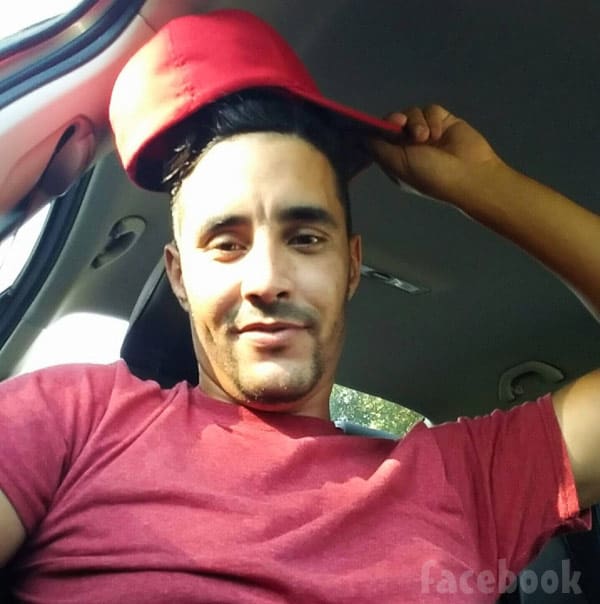 As far as how he is being portrayed on 90 Day Fiance: Happily Ever After, Mohamed responded on Sunday while watching the show by writing: “I am watching TV and I am so upset, like really upset, that’s all I can tell for now!!!”

After the episode, Mohamed penned a longer response:

Always there 2 sides of the story, my side of the story is not out there for some reason I don’t know, I have a reason for every decision I made and an explanation for anything I did I can’t say anything now until I get some legal advice bcz I’m still under a contract! But I am sure that there is a way for me to defend myself under the law!!!

That post inspired this interaction in the comments section:

COMMENTER: Honestly, when you get married you have ups and downs and love makes you work things out, if she has debts why didn’t you support her, advised her? As we see on the show you just complain! You loved her enough to leave your family and friends, your country!!! Didn’t you love her enough to grow with her?

MOHAMED: Thank you M******, i hope people learn from you how to give your opinion or as a question without being disrespectful. The debts and the money issues was not the reason that made me leave, i found out about that from the fist couple days i came to the states and even like that i tried to to change that but there was so many other things that no one can accept and live in a situation like that, there is a minimum amount of respect in the relationship should exist and i did not get that, also the drama was way too much than i can handle, and i did not leave until i was 100% sure that there is nothing more i can do to fix the marriage, sorry i cant give more details until the show is done but i promise one day i will let people know what happened exactly and what made me decide to leave

COMMENTER: I am sorry, I was not trying to be mean or nothing, only the two of you know what under circumstances you lived together! I wont deny that I feel sorry when I watch her cry on tv, but I also do not wish you to be miserable or unhappy because of that! Good luck! Y

MOHAMED: Crying is the easiest way to make people sorry for you also when the other person is not getting the chance to defend him or her self

Meanwhile, it seems that there are some unsavory individuals out there trying to take advantage of the Mohamedites by using the reality star’s name and likeness to solicit money. Mohamed is having none of that! He created a video to make it clear that NO ONE should send ANY money to ANY account online claiming to be him:

(For those non-Mohamedites out there, someone has started an online petition to have him deported at Change.org. So far it only has 234 signatures out of a goal of 500.)

In Mohamed’s brown pleather jacket news, it appears as though the break-out starticle of clothing may be getting left behind just like Danielle! Mohamed’s new favorite fashion statement is his blue “NO BAD VIBES” tank top featured in the video clip above. He can be seen sporting the tank in numerous photos over the last couple of weeks, including this shot with Einstein: 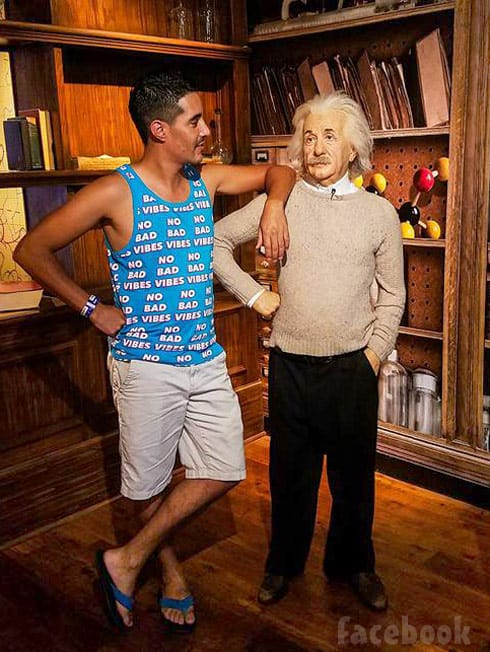 I should point out that Mohamed has left behind the jacket-friendly weather of Ohio for the warmer temperatures of Florida, so his clothing preferences are obviously heavily influenced by climate. Perhaps come winter time we will see the perfect union of pleather and tank top. Only time will tell. (Also, only time will tell if Mohamed’s new clothing article is charismatic enough to inspire its own Twitter account like @MohamedsJacket.)

Although pretty much any Danielle and/or Mohamed post could potentially go on forever, I should wrap this up — and I will do so with a true Mohamed moment of zen in which I think you can see a perfect representation of his life since moving to Florida:

Be sure to keep up with all the DanMo drama with new episodes of 90 Day Fiance: Happily Ever After airing Sunday nights after 90 Day Fiance on TLC!