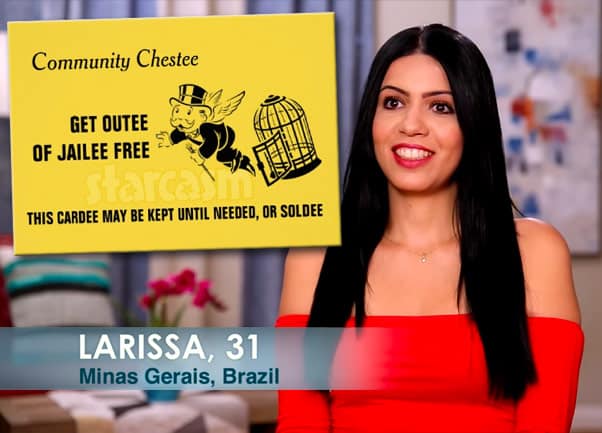 Brazilian 90 Day Fiance: Happily Ever After star Larissa dos Santos Lima was back in court in Las Vegas earlier today, dealing with her third domestic battery arrest back in January.

The result was a mix of good and bad news for the 32-year-old reality star. The bad news is Larissa did not have the case dismissed or denied, like her previous two domestic battery charges. But the good news is that she won’t serve any more time behind bars, as long as Larissa fulfills her sentencing requirements.

Despite being found guilty of disorderly conduct, it sounds as though the outcome was exactly what Larissa and her “handsomee” attorney, “DUI Doctor” Adam Vander Heyden, were hoping for. “Everything went according to plan,” Adam tells us about today’s court appearance. “The judge accepted negotiations to reduce her case down to a disorderly conduct upon successful completion of her requirements.”

According to Soap Dirt, here are Larissa’s specific requirements:

Larissa will be back in court on July 10 for a check up, by which point she is expected to have completed five of her domestic violence counseling classes.

UPDATE – Larissa shared a couple of posts on Instagram calling out the “fakes” and clarifying what happened in court — at least, as much as she was allowed to: 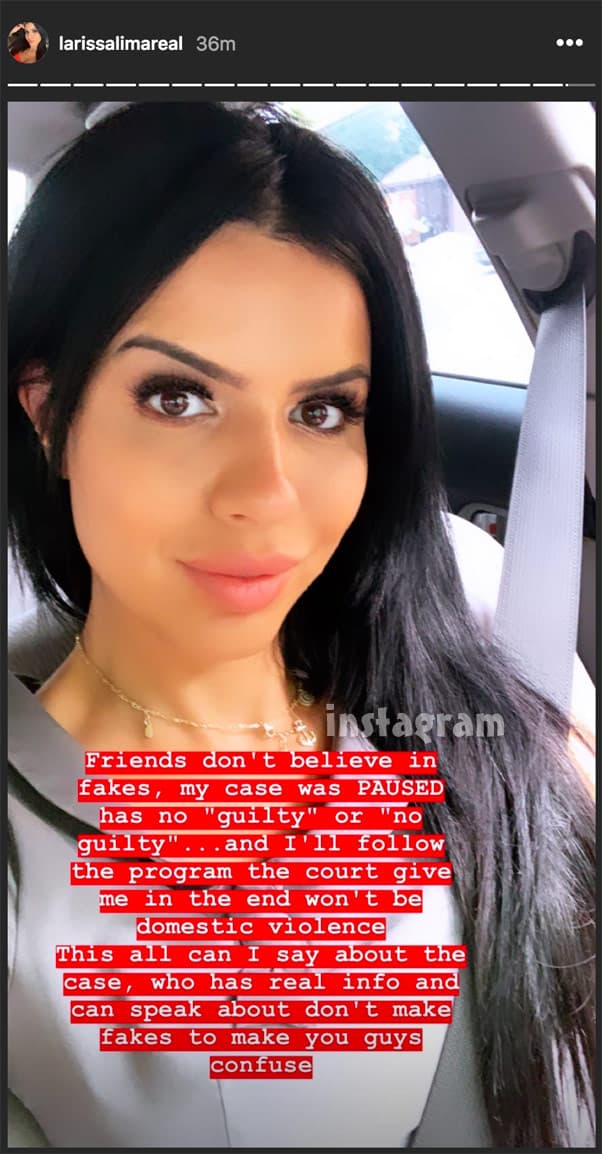 And just 5 seconds after the court the “fake factory” start to working lol
fasteerr than TMZ and intouchweekly ?
Don’t believe in fakes or who’s afraid to show the real intentions/profile
I’ll delete this post after a while
Have a wonderful day!!!
#thequeenstayshere

Also in court today were Larissa’s ex-husband Colt and ex-mother-in-law Debbie. Colt was looking quite dapper, and Debbie turned into “Dabbie” as the TLC cameras recorded her outside the courthouse: 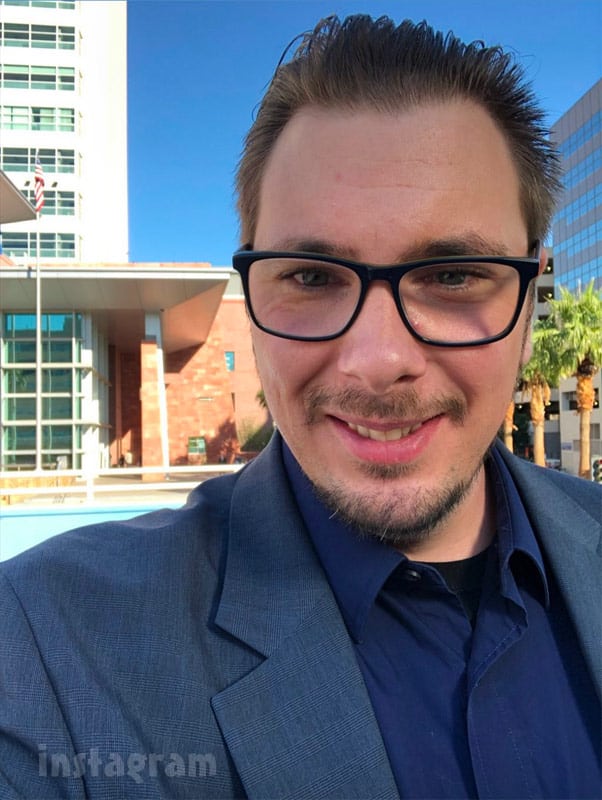 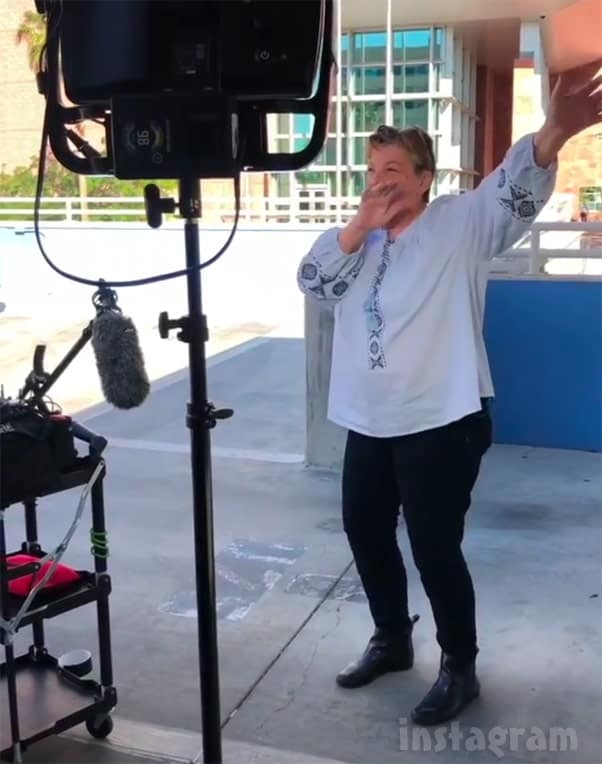 The domestic violence (now disorderly conduct) case is separate from Larissa’s immigration case, but clearly the charge will have an effect. Before the guilty verdict, Larissa seemed quite confident, as she shared a photo outside of the US Citizenship and Immigration Services office: 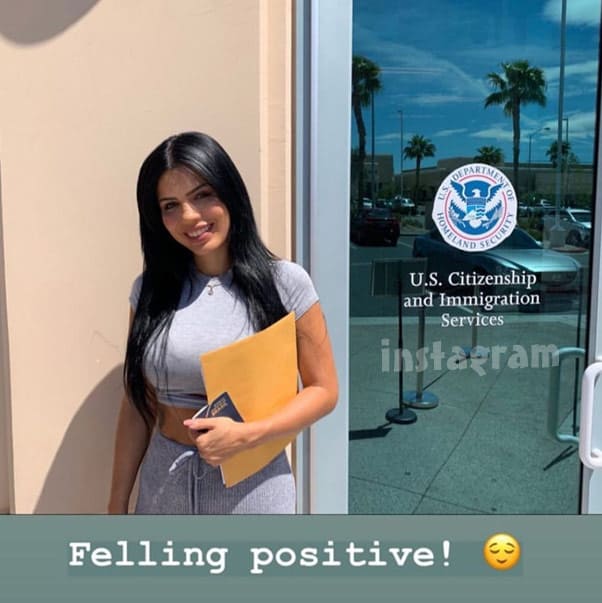 Will Larissa end up being deported? Things certainly don’t look good for her — especially if Colt is actively seeking her deportation. If Larissa hasn’t gotten her green card, and Colt is no longer willing to support her application, then I simply cannot foresee her being able to remain in the country — especially with her numerous domestic violence arrests.

Of course, 90 Day Fiance fans have witnessed some pretty egregious examples of what seemed to be immigration fraud, but we’ve yet to see a single cast member deported. Luis even got remarried and still remains in the United States!

Larissa’s criminal attorney remains positive about today’s results. “After consulting with her immigration attorney,” Adam Vander Heyden tells us, “this negotiation will not impede [Larissa’s] ability to obtain citizenship.” (Adam emphasizes that he is not Larissa’s immigration attorney.)

While we all wait to find out the fate of Larissa’s US citizenship, be sure to keep up with the explosive dissolution of her marriage to Colt with new episodes of 90 Day Fiance: Happily Ever After airing Sunday nights at 8/7c on TLC!