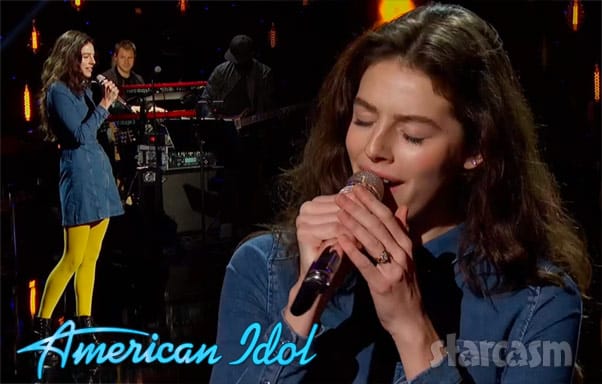 Former 90 Day Fiance star Evelyn Cormier blew away the judges during her American Idol audition performance of Chris Isaak’s “Wicked Game.” Her unique singing style made Katy Perry “Roar” and had judges Lionel Richie and Luke Bryan wishing she would sing “Play It Again” “All Night Long!” ? The impressive audition easily moved Evelyn on to the next round, and this week she cashed in her Golden Ticket as she arrived in California for Hollywood Week!

After Evelyn’s audition, Katy Perry told the teen that she is “literally, one of my favorite voices I’ve ever heard in my life.” Prior to sending Evelyn on her merry golden ticketed way, Katy gave her a very specific bit of advice by advising her to “pick the right songs.”

Katy iterated that point to all of the performers during Hollywood Week, and Evelyn’s choice to cover the Oasis single “Wonderwall” was such a perfect fit that she was one of three singers included in the show’s video clip about song choice. Here’s the video, which features Katy’s advice at the beginning and then Evelyn’s performance in the last third:

“I’m very familiar with the song ‘Wonderwall,'” Evelyn explains in the clip. “Just because I’m in a family band, and every time we play out, we do ‘Wonderwall’ as, like, our fun song.”

During Evelyn’s performance, the judges were all nodding their heads as Luke Bryan could be heard saying: “Great song!”

Katy and Luke would comment on Evelyn’s performance on Twitter, with Katy once again comparing Evelyn’s singing style to Cher:

Such a good spin on Wonderwall @Cher…I mean, @EvelynCormier Your voice is otherworldly #AmericanIdol

Song choice is everything. What did y’all think of @evelyncormier’s performance of Wonderwall? #HollywoodWeek #AmericanIdol

Evelyn would move on the to group performance as part of Five City Nitty Gritty, and later on to the Top 40 in Hawaii! (As our readers have known for months.)

After the episode aired, Evelyn took to Instagram to express her excitement, and to reveal just what an ordeal it was getting through Hollywood Week:

Guys!! I made ⭐️TOP 40⭐️!!I am so thankful ❤️ — Hollywood week was one of the most trying weeks of my life. No sleep, constant nauseous, loads of pressure, migraines, soo much stress, separated from family — I’m not going to lie, by midweek, I didn’t think I could last another minute! But I did and all the glory to God for getting me through it!! I would do it all again if I had to!! Now time to focus again but this time in Hawaii!! ?

SPOILER ALERT! Evelyn will have more success in Hawaii as she not only survives the purge from 40 contestants down to the Top 20, but also the next cut to 14 as well!

I have to admit it has been quite a trip seeing a familiar face on the American Idol stage, and we here at Starcasm continue to wish Evelyn well on her quest to become the next American Idol! Be sure to follow along with new episodes airing Sunday and Monday nights at 8/7c on ABC.