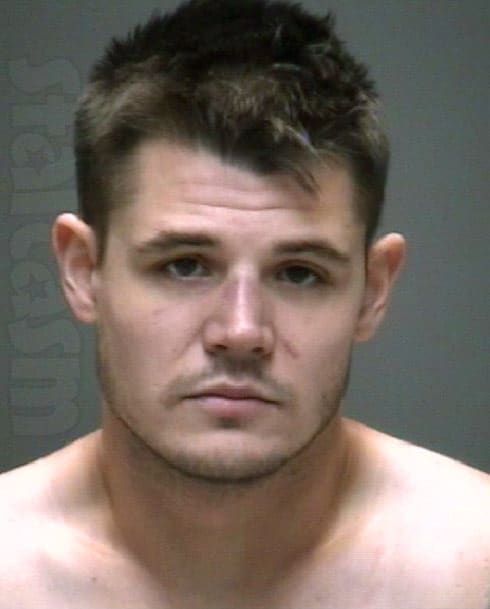 16 and Pregnant dad Joshua Drummonds is back behind bars in Texas and facing two felony charges after he allegedly attacked hospital staff and attempted to take a security guard’s gun earlier this month. Joshua was reportedly in the hospital awaiting transport to a Houston psychiatric hospital after an attempted suicide.

Josh, who is the father of Nikkole Paulun’s eight-year-old son Lyle, has been charged with felony counts of assault on a public servant and attempting to take a weapon from an officer. He is currently being held on $100,000 bond.

The incident that led to his arrest occurred at the Mainland Medical Center in Texas City, Texas on Saturday, September 1. The Galveston County Daily News obtained the police report from the incident, which alleges that Josh had an outburst during which he began threatening hospital staff members and breaking objects in his room.

Josh would later barricade himself inside his room, and a hospital security had to force his way in. Once the guard entered the room, there was an altercation during which Josh allegedly kneed the guard in the groin and attempted to take his holstered handgun.

Josh was unable to take the weapon, and he was eventually subdued and restrained in his bed.

According to jail records, Josh is still being held in the Galveston County Jail.

The arrest as well as the suicide attempt are nothing new for Josh, who has demonstrated a long history of mental problems and criminal activities. Most recently, the 26-year-old was arrested in Texas after attempting to choke someone he was living with. In his mug shot photo, Josh could be seen wearing a safety smock, which is sometimes called an anti-suicide smock.

After his arrest, Nikkole shared a post online expressing her concerns over her own safety should Josh be released. Her post included a lengthy history of Josh’s actions — including an overdose, numerous thefts, throwing a huge rock through her window, multiple stints in prison, and more.

Josh relocated to Texas from Michigan last year, and Nikkole began to feel safe for the first time in a while. That feeling would soon dissipate however. From Nikkole:

The leaving process was ugly, but it happened. He left. I kept in touch and told him I hope he gets a fresh start. A month or so in, he facetimed me and told me he was killing himself if I didn’t let him come home & proceeded to cut his arm on FaceTime with me (I screenshotted to show his family how serious everything was). 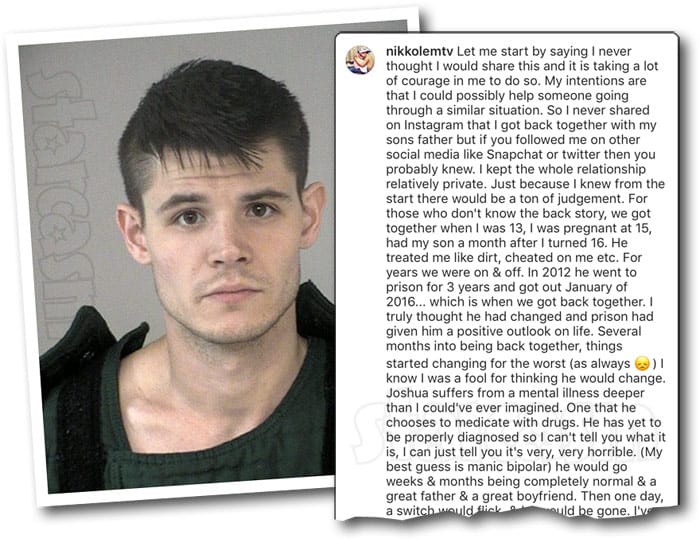 Nikkole included some very disturbing pictures with her post. From our article:

Nikkole posted a series of photos on Instagram, three of which showed Josh with a roughly seven-inch cut along the inside of his forearm. The cut was bleeding profusely in the photos, which Nikkole reveals were sent to her as an attempt to get her to respond to his text messages and allow him to return to Michigan. “Please answer,” Josh wrote before sending one of the photos. And after another he wrote: “I cut it again. It maybe to late.”

Nikkole’s concerns over her safety have not abated. “I hate that I even have to type this…” she tweeted on August 18, “but I want to make it VERY clear that would not EVER run off with my ex, Joshua. If I end up missing, I am in danger.”

I honestly had no idea this happened until just now. I’m so glad to know he’s back behind bars and I can feel safe again He doesn’t need to be out, ever.

Nikkole later defended her comment. “Victims do not have to feel bad for their abusers just because they have a mental illness. Period.” she tweeted.

I agree with Nikkole 100% here. Josh’s history demonstrates a pattern of abusive and unstable behavior that is nothing short of terrifying. I hope he is able to get the help he needs, but until then, he should be locked away.

We will continue to monitor his case and will update once there is a verdict and/or sentence imposed.

UPDATE – In response to a reaction from our posting of this article on Twitter, Nikkole revealed that her son Lyle has not spoken with his dad in over a year:

Lyle is doing really well and hasn’t spoken to him in over a year.

PHOTOS The stars of Teen Mom from 16 & Pregnant to now