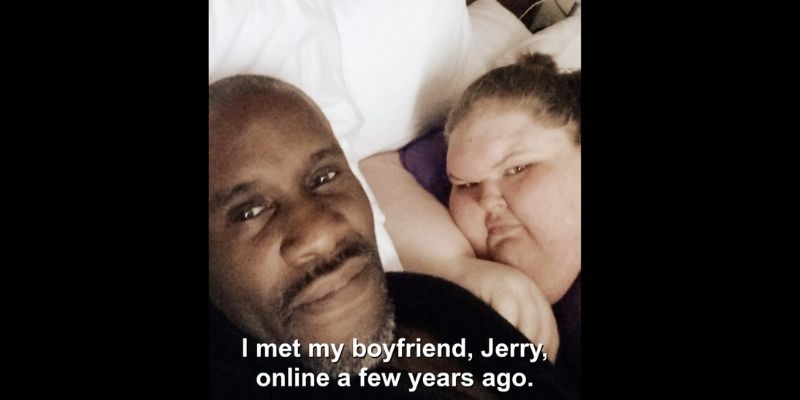 A big storyline for1000-lb Sisters‘s Tammy Slaton has been her hot-and-cold relationship with Jerry Sykes. Tammy’s weight loss has turned into weight gain since Covid hit, and she continued to gain weight after another visit with the sisters’ weight loss physician Dr. Proctor, and currently is back over 600 lbs.

Tammy depends on the help of her sister Amy and brother-in-law Michael for everyday tasks. They all live in the same duplex but because Amy and Michael are expecting a baby, the couple has plans to move to a bigger house and focus on their family. This leaves Tammy without the help she’s come to depend on.

The fear of being left alone led Tammy to contact her online boyfriend Jerry Sykes, who she had only met up with once during a trip to Atlanta. The pair met via a social media group for SSBW (Super-Sized Big Beautiful Woman) according to Tammy.

Tammy (34) says that she and Jerry (45) have been talking for a while about him coming to visit her in Kentucky. She was nervous about him meeting her family because she feared that they would not get along with him.

Amy has not liked any of Tammy’s past online boyfriends because she felt they were leading her on. She has the same fears about Jerry. When he finally arrived from his 8-hour trip.

Unlike some of her past boyfriends, Jerry actually made the effort to visit Tammy. However, Jerry still had a conflict with Tammy’s protective family.

45-year-old Jerry also has six children and five grandchildren, which means he has quite a bit of responsibility on his plate that could make a longterm relationship with Tammy difficult.

At the end of Jerry’s trip, Tammy’s brother Chris confronted Jerry about bringing Tammy food after Tammy was caught with a 32 oz. milkshake.

Before Jerry left from his initial trip, he says that with Amy and Michael moving, it puts pressure on him to want to stay to help Tammy.

While he was staying with Tammy he was not only getting her food, but he helped her clean her spider bite wound. As he leaves, he worries if she’s able to take care of the wound herself.

He tells the producer he doesn’t know if he can take on the responsibility of helping Tammy because he knows it’s a big responsibility.

“I want Tammy to lose like 200 lbs. and get this surgery so she can live a normal life like everybody els,” Jerry says.
Tammy says she doesn’t want Jerry to leave because she’s going to miss his presence. She was also afraid that he might not ever come back because she’s been rejected in the past by people.

After Jerry leaves, Tammy feels lost. She say a part of her “died” when he left. She didn’t know if he would come back, but he did.

Jerry asked Tammy if Amy having baby made her want to have a baby, but Tammy is against motherhood. This relieves Jerry because he doesn’t want any more kids.

UPDATE: The episode that aired Monday, March 8, 2021 revealed that Tammy and Jerry are currently on a break just as Tammy is facing worsening health complications with recovery from COVID and weight gain.