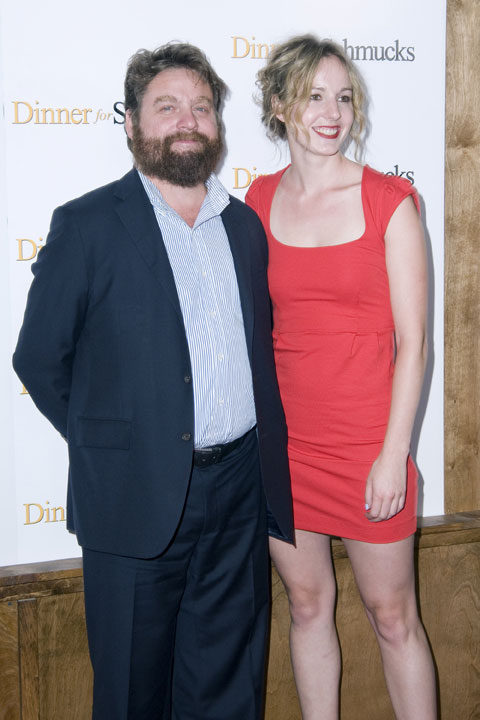 43-year-old Zach Galifianakis and wife Quinn Lundberg (30) are expecting their first child any minute. No one knew Quinn was pregnant, and the couple still haven’t confirmed that they are actually married.

Zach decided to go home to L.A. from the Toronto Film Festival where he was promoting his new movie You Are Here because Quinn is either in labor, or very close to labor. This is actually the first the movie’s director Matthew Weiner has heard about the pregnancy, telling E! News “We literally found out on Friday. Zach is going to be the best dad in the world.”

Zach and Quinn are thought to have gotten married last August (2012), and at that time their friend Amy Poehler told E! Online about their wedding “[I’m] so happy for him, and Quinn, his wife, is so amazing. They’re awesome. He’s awesome.”

Although Zach has been private about the pregnancy, he’s been very open about wanting to be a dad. He told Rolling Stone recently “I’ve been wanting kids for 10 years,” the actor revealed. “I’d love to adopt, have them naturally — all of it. I want, like, 15.”

In that same interview Zach described Quinn, who runs a charity called Growing Voices”as “the coolest.”

Congrats to them both!

The Bachelor’s Vienna Girardi is pregnant with twins