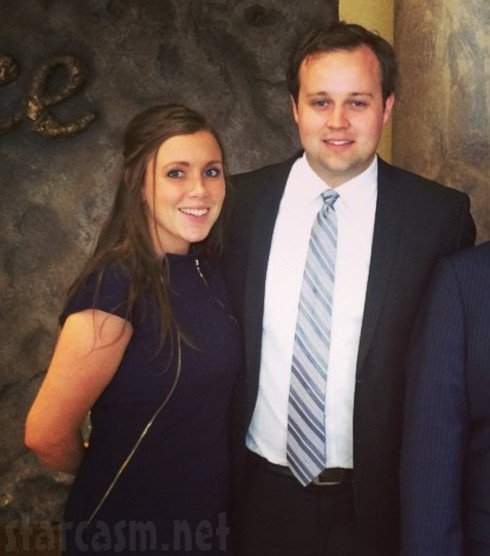 Four kids and counting? The preview for the next episode of 19 Kids and Counting leaves viewers hanging as Anna Duggar shows a pregnancy test to husband Josh Duggar.

General conversations about if/when Josh and Anna will expect another child have been going on for the past few months, now that youngest child Marcus is 17 months old. Of course, for most people, that would still result in a small gap between kids… But mother-in-law Michelle Duggar welcomed a child every 17 months on average.

In the brief clip, Anna admitted she’s taken several pregnancy tests since Marcus was born in June 2013. It’s unclear whether the one in question turned out positive, but, if it did, she would only be a few months along at this point: It seems the segment was filmed when she was visiting sister Priscilla Waller* in Chicago in the beginning of September.

Based on recent pictures of Anna, including the one at the top that was taken earlier this month, the mother-of-three really isn’t showing any signs of a new bump. She’s also stayed very active in recent months by traveling around with Josh for his lobbying job.

We don’t know anything for sure. But, for the sake of arguing Anna is pregnant again, a pregnancy announcement would explain why producers used Anna and Josh for next week’s season finale instead of Jill’s wedding or Jessa’s engagement. Plus, imagine how much hype that could build for the next season… Especially if Jessa also has a pregnancy that overlaps with Anna’s and Jill’s.

Tune into 19 Kids and Counting next Tuesday to see the results of Anna’s test!

*Corrected because these families may have a lot of kids, but they haven’t resorted to repeating the same name.

Was Amy Duggar one of Josh Duggar’s molestation victims? Her boyfriend answers