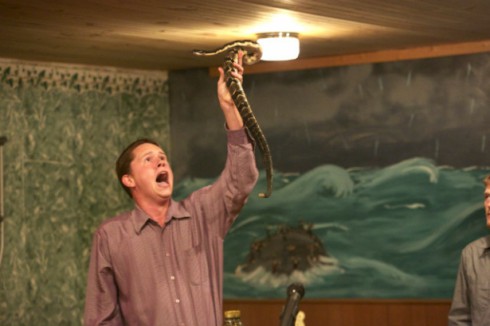 NatGeo’s Snake Salvation is reality show that’s hard to turn away from. It follows the leaders of two churches in the south who abide by the signs listed in March 16:17-18. As well as laying on hands of the sick and casting out demons, the verses also say that if you believe in Jesus, you can drink poison and not get hurt, and handle serpents and not be harmed.

So far on the show there hasn’t been a lot of talk about drinking poison, but they certainly handle snakes a lot. They feel like they can only be protected from the snakes while in church when they feel the “anointment” of God, so when they are caring for the snakes and hunting them (something they have to do a lot because the snakes die quickly in captivity,) they feel like they are in as much danger as the rest of us. I’m not sure what the ratio of getting bit, but they seem to deal with and handle a good many snakes without getting bit. But sometimes they do. Three people have been bitten on the show so far (two on camera,) and while they experienced a great deal of discomfort, usually for days, they recovered. It’s heart-stopping to what them sit and around and wait to either live or die.

It doesn’t always happen this way. Sometimes the snake handlers die, even in church. In 2012 a friend of both of the pastors featured on the show (Jamie Coots and Andrew Hamlin) died after being bit by a rattlesnake during a service. A photographer documented pastor Randy “Mack” Wolford as he suffered from the bite after refusing treatment.

Most of the cast-members of Snake Salvaiton have been bitten in their lives, sometimes several times. At least a couple, including pastor Andrew Hamlin, have received treatment for at least one of the bites. Some of them have different beliefs about when and if treatment is appropriate. Hamlin thinks that if you get bitten while handling the snakes outside of church, it’s okay to go the hospital. Paster Jamie Coots, his father Papaw, and son Little Cody have all made a vow to each other to never seek treatment no matter what. Little Cody was bitten while hunting during an extremely careless accident when Paster Hamlin turned around while holding a snake on a stick that hit Little Cody. Click here to see video of that.

One of the reasons why these faithful snake handlers may be able to survive so many bites (although sometimes they’ll lose a finger or have some other complication,) is because in general many of the snakes they handle aren’t as toxic. If they were handling black mambas, they’d be dead, no question, but cottonmouths and copperheads, the main two snakes they find in their hunts, while venomous, don’t mean sure death.

Cottonmouths at maximum, can inject enough venom to kill a person, but that’s not usually the case. Copperheads are even less dangerous. Although the bites are excruciatingly painful, they are known to cause death in less than 1% of untreated cases. Neither cottonmouth or copperhead venom is neurotoxic like the venom of many species of rattlesnakes. That’s an important distinction because while the venom of those snakes can wreak havoc on the body and cause necrosis (death of tissue,) swelling that threatens your breathing, and nasty infections, rattlesnake venom causes systemic shutdowns. If not treated properly, death can occur within 6-48 hours of a rattlesnake bite.

Pastor Wolford was bitten by a rattlesnake, not a copperhead or cottonmouth, so his chances for survival were extremely slim.