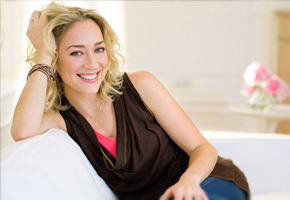 Model-actress-photographer-filmmaker Kris Carr got diagnosed with stage IV cancer in 2003, when she was 31-years-old. Six years later, Kris is still ferociously alive, and still living with cancer.

Carr’s tumors aren’t gone, but they aren’t growing, either. She’s never had any sort of conventional cancer treatment like chemotherapy, but instead chose on her own path to find healing. She uses a mixtures of raw foods, yoga, dancing, spirituality, love and optimism to find balance for her whole being instead of just localized treatment of her tumors.

She takes great care of herself, but that doesn’t mean she’s stopped working. She began shooting a film just a few weeks into her diagnosis, which debuted on TLC in 2007, called Crazy Sexy Cancer (you can buy your own copy by clicking here). It’s a brave, humorous film that highlights what Kris’s irresistibly charming and tenacious qualities. She’s used her gifts of candor, humor, and strength to disarm acceptance perceptions about cancer. It’s so easy to associate cancer with feelings of pity, sorrow, destruction, and death, but Kris points out that cancer has been her best teacher about life. She took on her diagnosis as a challenge to survive, and to enjoy every single moment of her life.

Here’s what Kris had to say to WomensHealth.gov:

“By setting the tone for how I was going to deal with the disease, I found that it really helped people learn how to talk to me. I stop people in their tracks when they feel sorry for me, or when they get overly dramatic and morose. No way do I open myself up to that kind of energy. It’s ok to be sad, cry, scream, spit, or yell. But, it’s not ok to wallow in that state. Do it and then move on. If you don’t, no one else will and your issues will sink deeper into your tissues. Don’t play the victim and don’t let anyone else victimize you. It took a while, but I realized that cancer made me stronger.”

This girl is a true life force. She truly lives life, and literally glows as she speaks the truth. We’d all do well to listen to her. Whether we are young, or old, have a disease, or not, we all need some sort of healing. We all know that life is short, but we also forget to enjoy ourselves, now, in this moment. We all have the choice to take care of our bodies, eat nourishing foods, relieve stress, deal with emotional baggage, or not. We have the choice to take life by the reins if we want to.

If I haven’t been able to convince you to fall in love with Kris already, just watching a few minutes of her in the video clips below will make your knees buckle. If you still need more Kris, Oh She Glows has another great interview with this tenacious girl.