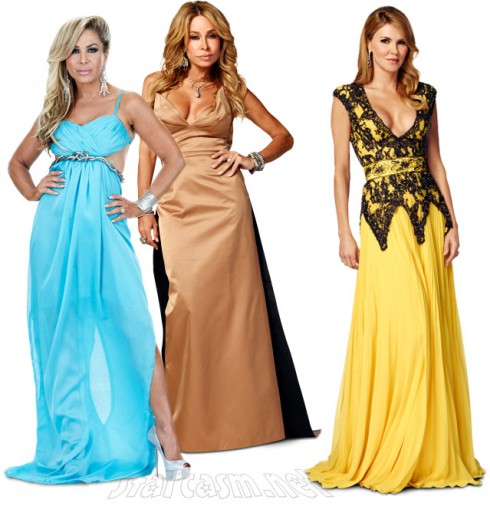 We all knew it was coming, and tonight on The Real Housewives of Beverly Hills Adrienne Maloof and Paul Nassif announce their separation. And the reason given for their split? According to “friend of the ‘wives” Faye Resnick, Brandi Glanville is to blame.

In a preview clip for tonight’s episode, Faye confronts Brandi, asking, “Do you feel good about yourself, breaking up a family?” She then adds, “You put them through hell.” Considering that Faye has had Adrienne’s back all season, it’s not surprising that she would side with her, but what is her argument that Brandi is responsible for a married couple’s separation?

It appears that Faye is drinking Adrienne’s Kool-Aid: Adrienne alleges that Brandi is responsible for her separation and ultimate divorce from Paul because she revealed a very personal family secret, which is that Adrienne used a surrogate to carry her twins, Christian and Colin. Although Adrienne’s legal team succeeded in making sure the surrogacy comments stayed off the air, rumors quickly swirled about the possible “secret” Brandi could have revealed, and Adrienne decided to come clean.

In an exclusive interview with Life & Style Adrienne said, “I would think Brandi, being a single mother, would have a heart and understand my feelings, where I’m coming from… Brandi took away something so precious from our family.” Adrienne apparently had planned to reveal to her sons in person that she had a surrogate carry them, and was extremely angry that her children could potentially find the secret out through the media.

Regarding Brandi’s revelation of the secret as a possible reason for divorce, Adrienne added, “Brandi did destroy our family… Right now I’m really hurt and upset, especially because I’ve stuck up for Brandi as a mother in the past.” It seems that Faye agrees with Adrienne, as she cites the stress that Brandi revealing the surrogacy secret caused the couple as the reason for their ultimate decision to end their marriage.

Adrienne’s feud with Brandi appears to be ongoing; she told Life & Style that she felt betrayed by Brandi when she found out she and Paul were exchanging private texts and tweets, even after Paul cursed Brandi out for revealing the secret on an episode earlier this season. Adrienne said, “I believe getting close to Paul is a ploy on Brandi’s part to make herself more relevant… I feel the sudden friendship with him was thought out and vindictive.”

Faye confronted Brandi on an episode earlier in the season at Kyle’s dinner party. Although Adrienne was not present, Faye accused Brandi of revealing Adrienne’s surrogacy secret to be vindictive and cruel. (Faye also revealed that Adrienne’s brothers dated her step-daughters, so she is not exactly unbiased in this situation.)

As we previously reported, Faye addressed the episode in her Bravo blog, which was later deleted. Luckily, we still have it! In her blog, Faye wrote: “By raising the issue at the dinner party I was hoping Brandi would shed some light as to what would drive her to reveal something so intensely personal and private. Brandi’s response was confusing. She first said she was sorry for what she said but didn’t want to apologize — yet. I didn’t understand? If you are sorry for something you have done and carrying it on your mind, and it’s upsetting you, why not just apologize and move on? If your truly sorry, you apologize and cleanse your aura. But minutes after saying she was sorry she said she wasn’t going to apologize because Adrienne hadn’t apologized to her. Apologize for what?”

Faye went on to say: “It’s very difficult for me to sit back and watch anyone be mean to people that I love. The damage Brandi caused Kim and her family last season was reprehensible. The attacks on Adrienne and Paul was beyond belief. These statements are made with no purpose other than to be hurtful and cruel. And while afterwards she claims to be “sorry” for what she said, the harm has already been done, so saying, “Things just come out my mouth” or “I’m sorry” time and time again this behavior becomes disingenuous.

Faye’s confrontation with Brandi will be featured on tonight’s episode of Real Housewives of Beverly Hills, at 8/7c on Bravo.