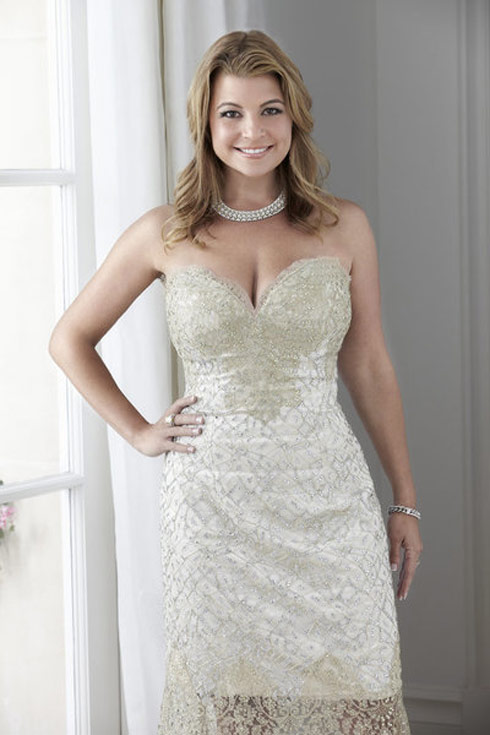 The Real Housewives of Beverly Hills added two new ladies to their roster for the show’s sophomore season, and although they are technically referred to as “friends of the housewives” on BravoTV.com, it’s becoming evident only a few episodes in that they will be playing a MAJOR role in the drama this season!

We already had a chance to meet Brandi Glanville, the smokin’ hot model ex of LeAnn Rimes’ new hubby Eddie Cibrian, and this week we got to officially meet Dana Wilkey, a 37-year-old event planner and mother of one who apparently has no qualms about flaunting her wealth! 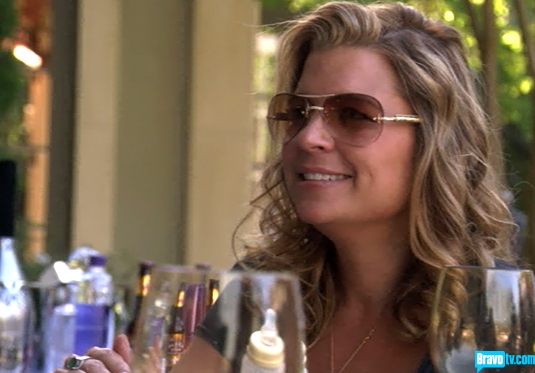 When we meet Dana she greets Kyle Richards and Taylor Armstrong at her front door wearing an exploding cleavage wedding dress and diamond studded tiara. She insincerely apologizes for her over-the-top appearance before explaining that she had a meeting to discuss her future wedding plans that (conveniently) went over on time.

Of course she shows her new cast mates all the expensive jewelry she has laid out to choose from and explains that she and her fiance will be getting married in a castle just outside of Paris in 2012 before inviting them to take a seat in the other room until she finishes up.

So, who’s the lucky guy soon to be burdened with Dana Wilkey’s expensive tastes? His name is John Flynn and he is, as Dana says, a “serial entrepreneur.” The two have been something of an item since at least 2007 when they were photographed together at the Sundance Film Festival premiere dinner party for the film Slipstream. And the two were photographed together again at Sundance the next year, this time at the American Film Market Bold Films party.
^ Dana Wilkey and her rumored fiance John Flynn at the AFM Bold Films party held at the Wokcano restaurant in Santa Monica, California on November 7, 2008. (Photo by Michael Bezjian, licensed from Getty / Wire Images)

John Flynn is in his mid-forties and shares a child with Dana – son (and Thai speaking kid genius) John Cayden Flynn. I managed to track down his birth announcement from the Los Angeles Times – that’s it there on the right.

Flynn’s resume includes building four 1,000 employee companies in four different industries, being a producer, and writing a financial bog at regularguyeconomics.com. Here is a summary of how he describes himself on the site:

43-year-old John Flynn has been a principal investor in four companies in four different industries: environmental services, computer services, specialty financial services and transportation and logistics services. His latest investment has been in a pharmaceutical delivery company, Nanoviricides (NNVC.) Flynn also has held senior management positions including CFO of Express-One, Chairman and co-founder of Remote Lojix (from January 1994 – November 1998, when it sold to Avtel Communications. He also founded DAC Environmental Services, Inc.

So there you go! THAT is Dana Wilkey’s fiance. Being a gossip blogger by trade I feel I should point out there are rumors swirling online that Dana and John have split up, but there has been no evidence as yet to support those rumors. Could it be that we will see their break-up play out on this season of The Real Housewives of Beverly Hills?