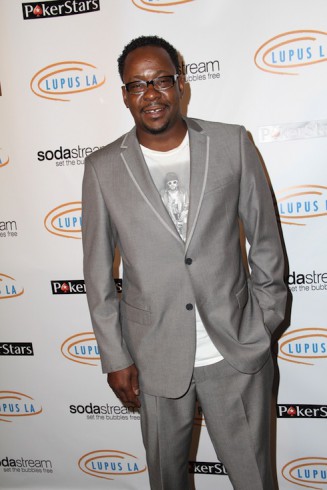 Bobby Brown has been silent on the issue of his daughter’s hospitalization and health since Bobbi Kristina slipped into a coma on January 31st. This weekend, the father and entertainer shared his first public words on the state of his daughter, while onstage at what was also his first performance in several months.

Brown was performing at the Soul Food Festival in Los Angeles, and he didn’t wait long to get serious with the crowd. After the first song, a clearly emotional Bobby told the audience, “I just wanna tell y’all, this feels…so good.”

Rough times are rough times, and hard times are hard times….And I don’t even know what the hell I’m goin’ through right now; I’m givin’ it to God and lettin’ him deal with it.

Check the video below for Brown’s full remarks (his speech begins around the :40 mark):

Brown also confirmed that, following the show, he was headed directly back to Atlanta to be with his daughter.

Though she was moved from an Emory University hospital to a rehabilitation center about a month ago, there have been no reports on an improvement in Bobbi Kristina’s condition. Bobbi’s grandmother, Cissy Houston, made headlines in March when she acknowledged that, medically speaking, there “isn’t a lot of hope” for her granddaughter.