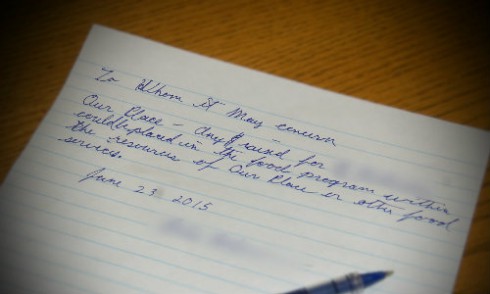 A homeless man in British Columbia is teaching many others a lesson on selflessness: After he found and returned $2,400, the community raised $5,000 for him on GoFundMe. The local police then agreed to track him down and give him the reward.

After hearing this story and seeing how this case touched so many people, I took a personal interest in finding this man, looking for him everywhere while on and off shift….I kept trying because I needed to tell him about how the community had rallied together to help him. I finally caught up to him on Monday and told him about the fundraising….His response surprised me yet again, when instead of asking how to collect it, he asked me how to donate it to Our Place and other food service providers for people in need.

Constable Bérubé asked the man, who requested that he not be identified, to think about the offer overnight and give his final answer the next day. When the next day rolled around, his answer was the same. As he put in writing, the man said he would like it if “any $ raised…could be placed in the food program within the resources of Our Place or other food services.”

When police reported the man’s decision to Mike Kelly, the friendly stranger who spearheaded the fundraising campaign, Mike said he was even more inspired.

“Here is a man who is facing many challenges, yet despite that, he chose to do the right thing and see that another person wasn’t left short thousands of dollars and facing the challenges that would bring them,” he said, vowing to “do everything I can” to help fulfill the Good Samaritan’s one request for a job.