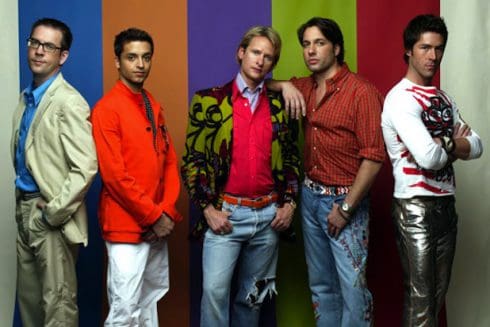 The Netlix show Queer Eye, which is a reboot of theEmmy-winning Bravo show Queer Eye for the Straight Guy, has a whole new cast making over men who need a little extra mojo. It’s hard to believe that the first Queen Eye show ended over 11 years ago! Find out what the members of original “Fab Five” are doing now.

One of the best things about the concept of the show is that it explores all aspects of the makeover subject’s life, not just their clothes. The end result is always a sincerely emotional moment because the biggest change a person can make is believing in themselves a little more.

Carson worked as a fashion stylist before landing the gig on QEFTSG, which was just the beginning for him. Since the series ended in 2007, Carson has appeared on hosted a number of reality shows and written several books. Since 2015 he has been a regular judge on another Emmy-winning reality show: RuPaul’s Drag Race.

Along with appearances on many other food related shows, Ted Allen has been the host of the hugely popular Food Network show Chopped since 2009. He’s also published a few cookbooks and written for and Esquire book series giving advice to men about all aspects of life.

Kyan traveled the world for several years studying yoga, but is currently a style pro for The Rachel Ray Show. In 2015 he told Oprah: “After the show I just went on a quest. I studied yoga, I traveled to Egypt and to India and South America, and moved to Mexico—I mean, I studied with the shamans, I did it all.

“At the end of all that I realized, ‘I don’t have to do another yoga class. I don’t have to study another mudra or mantra or go to India or go anywhere.’ Because the thing I was so desperately looking for, I’m already that—we’re already that which we’re seeking,”

2 weeks to the premier of Get A Room with Carson & Thom on @bravotv ? #getaroombravo #interiordesigntv #home #design #lifestyle

Thom ran his own interior design consultancy before and after his Queer Eye experience. He’s coming back to Bravo with fellow Queer Eye alum Carson Kressley for Get a Room with Carson & Thom. The show debuts October 19 and showcases Thom teaching his old friend how to get into the interior design business. During each episode they’ll transform the living spaces of two clients.

Love this suit from @keprebels for @varietylatino @variety which was honoring @evalongoria two years ago. I need a new suit. What color should I go for next ???

While the rest of the OG Queer Eye has stuck to reality TV, Jai has launched into an acting career, which was his background to begin with. Among many others he’s appeared in How I Met Your Mother, Eastsiders, Grace and Frankie, Grey’s Anatomy, and Wisdom Of The Crowd, and Sharknado 5. He originally broke into the industry at age 18 with a role in Rent on Broadway. He’s since returned to Broadway in The Producers. Jai also is passionate about Positively Fearless, which is a project to educate men in the Latinx community to get checked and treated for HIV.