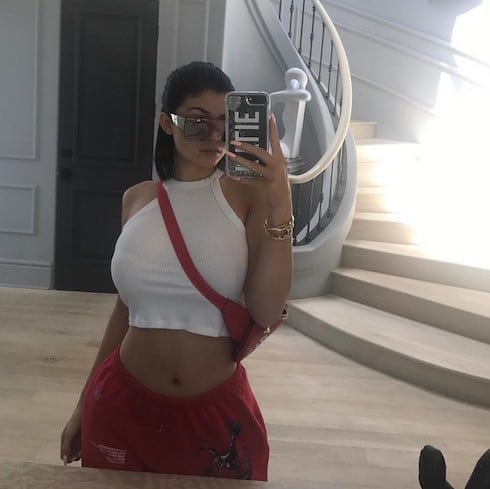 There are almost as many suggested Kylie Jenner due dates out there as there are stories on the 20-year-old’s pregnancy, and the inconsistencies are beginning to raise eyebrows among her fans. The original report didn’t claim a precise due date, but details (and the flat tummy she was still sporting in her Instagram feed) suggested that Kylie may have been approximately two months along.

Since then, different major outlets have offered different due dates and changed their suggestions at least once, leading to a wave of confusion. For example, People originally reported that Kylie was due in February, which would suggest she got pregnant in May and was four months along. Page Six likewise quoted their source saying that Kylie had been “looking pregnant for about four months.”

Those statements led internet detectives to scour Kylie’s social media posts for any photos offering even the merest hint of what could, possibly, look like a baby bump. Like this one:

However, Kylie has also reportedly been uploading old photos for weeks, so take that with a grain of salt. And TMZ has now updated its own timeline, alleging that Kylie is even further along: “around five months pregnant,” according to their latest take. Given the differing numbers and the flexibility of the word “around,” it’s possible that Kylie Jenner’s baby is due any time from late January to early March.

But further complicating matters is a now-viral tweet that Kylie’s presumed baby daddy Travis Scott shared back on June 12th:

Legit happiest day of my life.

If Travis found out that he was going to be a father on June 12th (assuming he didn’t find out earlier and write the tweet later), it seems plausible to assume that Kylie got pregnant about two weeks earlier–that’s the generally accepted time between conception and a missed period, though some pregnancy tests are more sensitive and can be used sooner. Which would put her due date at late February or early March. (There’s also the controversy over whether Travis is actually the father, but, for now, there’s no reason to believe otherwise.)

(Photo credits: When is Kylie Jenner’s baby due via Instagram)

Kourtney Kardashian playing hard to get for Scott Disick, who turns to Kris Jenner for help