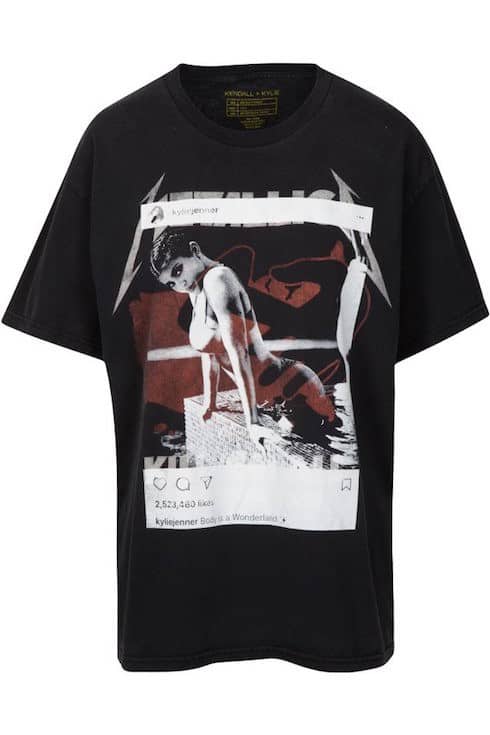 Kendall and Kylie Jenner’s most recent publicity stunt-slash-merchandising opportunity came in the form of a series of unauthorized T-shirts featuring classic album covers superimposed with photos from the girls’ Instagram feeds. The Jenner sisters called their pseudo-vintage shirts “repurposed,” and took from the likes of The Doors, Ozzy Osbourne, Tupac, and Notorious B.I.G.–before outrage (and the threat of lawsuits) forced the shirts out of circulation. (They had been selling for $125 each, in case you were wondering.)

One especially curious choice, seen above, was to splash a Kylie Jenner bikini pic across the cover of Metallica’s 1983 debut album Kill ‘Em All. It didn’t take long for Kendall and Kylie’s Metallica shirt to come to the attention of the band, and, recently, frontman James Hetfield shared his thoughts on the matter. James has definitely calmed down and wised up since embracing sobriety over a decade ago, but his comments nonetheless feel…restrained? Mature? Dad-like (not entirely shocking, given his three children)? Take your pick:

“I guess what they were thinking is, ‘We can do whatever we want.’ To me, it’s disrespectful,” Hetfield told ET Canada before a show in Toronto this month. “We’ve spent thirty-six years working hard, doing our best to keep a really close connection with people, mak[ing] every note count, and someone just throws something up over something that we feel….Not that it’s sacred or anything, but show some respect.”

Sharon Osbourne was far less calm about the whole t-shirt controversy, taking to Tiwtter to say the girls “haven’t earned the right to put [their faces] with musical icons,” and that they should “stick to what they know”–namely, “lip gloss.” Sharon later expressed regret for saying anything at all, explaining via her platform as co-host of CBS’ “The Talk” that she understands the Jenners’ game all too well: “They are doing this for press, like they do everything, and I fell right for it by responding.”

“They’re getting their line up and running by using all these iconic performers to just state that they now have a line of merchandising,” Sharon continued. “They know exactly what they’re doing. They’re not kids. They were brought up in this industry.”

We’ll end with a spirit of collaboration–here’s Metallica performing the Kill ‘Em All standby “Seek And Destroy” while opening for Ozzy Osbourne in 1986: