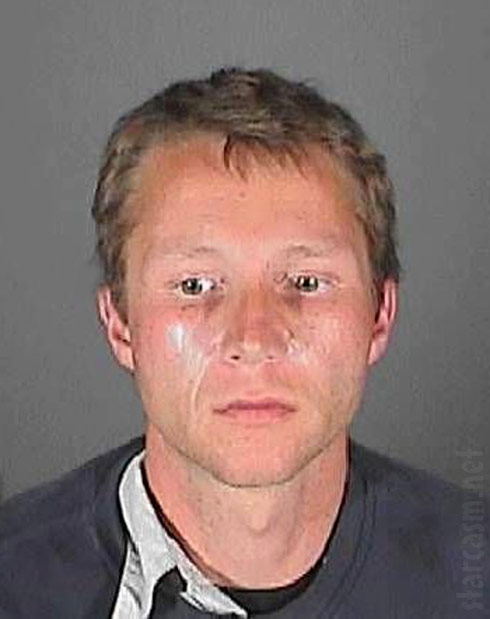 Charles Pearson, the man arrested for cyber-stalking television and radio personality Dr. David Drew Pinsky Tuesday, had several websites including internethackers.com on which he posted thousands of seemingly random screen captures from his computer (sometimes collaged with writings) as well as an endless stream of garbled writings mostly dealing with Dr. Drew, UCLA, USC, 2600.com and Dr. Phil Halamandaris and how they conspired to place a pain-inducing implant called a GED in his genitals.

This post contains some of Pearson’s more succinct moments in a long, multi-part letter that summarizes what he alleges happened to him at the Olive View Medical facilities of UCLA. Because of the length of the letter I am forced to stretch it out over multiple pages. I will also throw in an image from Pearson’s website at the top of each page – you can click on them to see larger, easier-to-read images. This first page is the longest, so don’t be too intimidated. But, if you don’t have the time to read through the entire diatribe, I recommend reading the Intro/Background on Page One and the Conclusion on Page Five.

Here is the index I will place at the bottom of each page:

On March 8 2009, I was taken and admitted to Olive View Medical Hospital. At this hospital I was debriefed by police, a report was generated and then I was sedated against my wishes twice and without cause. Without cause indicates that I was of sound mind, control of my person and my actions and compliant with any direction communicated and received. The hospital was in direct knowledge of my involvement with internethackers.com and was given an order by David Pinksy to hold me so that they could illegally implant me and continue this on air abuse described throughout the body of this document. The nature of this abuse is known a GED shocking or electro shock treatment. Given the above knowledge of my arrival and my ownership of internethackers.com, the hospital video camera system was used and collected the entire miss management of both my entrance into and the hospital and the two assaults that took place during my admital at UCLA Olive View medical center refuted by UCLA internal investigation.

When I arrived at the hospital as a detained prisoner by LAPD, I was covered in a pepper spray and informed the hospital that I still had burning sensations in my eyes and skin. I wanted to wash my face off before being transported into a medical observation secure holding cell. After the LAPD finished taking a report for the reasons why I was taken to the hospital, the emergency room injected me with a sedative. I calmly refused and cowered into my chair however I was held down and injected, then forcefully made unconscious while restrained and tied down to a hospital bed. When I awoke I went to the attendants station at the front of the room where I demanded an explanation for the sedation. They told me to sit down while I refused and demanded to speak to an administrator or supervisor for the front desk.

I mistakenly told them that I was a Marine, as I am obviously not associated with any military organization, however I thought that this would protect me from another unwarranted attack and violation by being injected and strapped down to a bed for 24 hours. At the time I announced that I was a Marine, a person name Jose, hit me in the back of the head with a choke hold and dropped me to the floor. Several male nurses jumped on top of me as I screamed and they pushed their knees, fists and elbows into my joints causing me to scream terror in discomfort. As I screamed they pushed harder into my joints and spine. As if to punish me, I described verbally as best I could as there was a corded telephone on the desk that was tapped by the best hackers around the world.

I was strapped down to a bed once again and injected and laid for another 24 hours until I woke up on March 10, two days after my entrance. I maintain that there was never a time that I was a danger to my self or others that would require or follow protocol finding it necessary for sedation. It was arranged by a collaboration between David Pisnky, LAPD and UCLA to sedate and implant me for the abuse that was to come for the past nine months as I write this document.

I contend that UCLA falsely imprisoned me in attempts to gain leverage and to instigate the abuse patters that I have recorded on my website. David Pinsky began his radio recording of on air GED shock abuse and has done so wth the assistance from the hacker group 2600 and the largest universities in our nation including USC and UCLA.

.
UCLA’s intentions were in collaboration with David Pinsky, USC and CBS, Hollywood’s and Los Angeles County’s largest media Wholesaler. UCLA medical division is named David Geffen school of Medicine and it was the intention of using the coincidence of First name David common to both defendants in this case. This commonality of first name is a basis for a manifold theory, a complicated understanding of theoretical system models to explain the reactions and effects of certain inputs or ingredients added to a environment.

The use of that coincidence and suggestion is the basis for identifying the social experiment that David Pinsky, USC and UCLA are attempting to continue through use of fear and harassment based tactics.

Over the next few days as I recovered from the injections in the hospital I was told that I have a mental disorder and that I was there for observation. As the days past I noticed that my ribs were broken and that I had a scab on my spinal cord, apparently where David Pinsky had place a bio medial implant to set the course for the GED shock abuse that I have excessively received over the past nine months.

For the pain, I was given the option of having a motrin or Tylenol only while my entire body was in incredible amounts of pain. I was unable to walk correctly for three months following my admittal at Olive due to the lumbar puncture and broken ribs. I requested x rays to be taken of my spinal column, my wrist and ribs to document and obtain another opinion in regards to the extent of my injuries. On March 16 I was granted the requested x ray procedure however I was never shown the x rays that show the implant that was placed on my spine.

.
The awareness of this my Internet activity on internethackers.com is found by the computer sciences divisions of UCLA. UCLA has been aware of my internet activities as I have taken several Internet classes at UCLA and the abuse is simply to feed hollywood’s reality movie support for David Pinsky.

UCLA illegally injected and sedated me to place a implant on my spinal cord. This implant is used to control certain activities of my body and to include themselves into the history of my website and its related material. UCLA acted in a negligent manner to further their global presence and awareness to mainstream media and global observing think tanks.

The basis for a social experiment is to mold your environment to persuade your perception of the facts surrounding a particular set of events. It was the intention of UCLA and David Pisnky to remain un prosecuted for these crimes committed at Olive View Medical hospital. and to associate with my domain InternetHackers.com. What is deemed deserved and what is actually experienced in accumulating your necessary fulfillment of needs and demands or expectations. Further, the sequence of events and abuse leading up to my admitted to Olive View Medical Center is a medical branch of UCLA, an institution that has been aware of my self and the activities and material posted on my website, Internethackers.com.