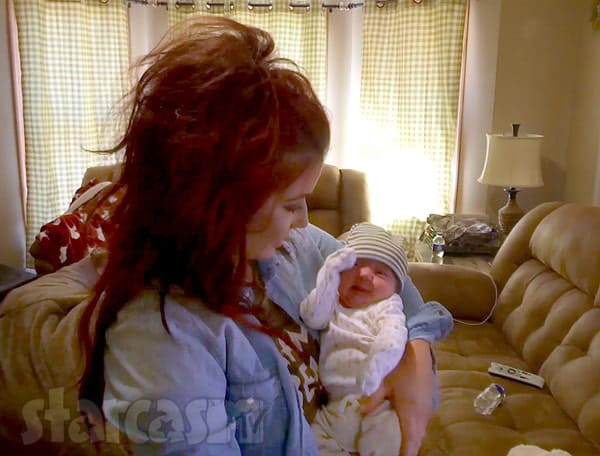 Teen Mom 2 returns for a dramastic new season Monday night, and MTV has been teasing the return of their team of drama mamas with a series of preview clips for all five of the moms!

Here are each of the preview videos, which were posted on the Teen Mom 2 Facebook page, followed by brief descriptions:

“Chelsea reveals Baby Watson in this sneak peek from the upcoming season of Teen Mom 2.”

The MTV film crew arrives at Chelsea and Cole’s house after the birth of their son Watson. After a series of hugs and congratulations, the crew (and viewers) are introduced to Watson! Producer Mandi gets a bit tearful and expresses her frustration at the overwhelming awesomeness of lil Watson: “I thought I wasn’t going to cry…” Mandi=errybody

“With Briana back, it’s sure to be a season filled with new Teen Mom friendships!”

In this clip we get to see Kail’s ex Javi Marroquin as he visits the DeJesus family in their hotel room while they were all in the same town to film Teen Mom after show specials. Javi and Briana’s sister Brittany DeJesus have been quite chummy for a while, but Javi reveals that their mother, Roxanne DeJesus, tried to slide Javi into Briana’s DMs! “Your mom tried hooking me and Briana up,” Javi tells Brittany, “but she’s pregnant now, so that’s kind of out the window.”

Briana just retweeted the clip without commentary, but Javi and Brittany had a little more fun with it:

I've never laughed so hard in my life https://t.co/Q3r52SJptz

“Leah and her girls are all hitting the books this season on Teen Mom 2! ✏️”

Leah and daughters enjoy a minivan ride together as they all discuss their days at school — including Leah! As mom explains she had to do some writing exercises detailing her goals, Aleah shows that she is 7 going on 15 as she interrupts her mom with “Blah, blah, blah…” I confess that I laughed — but I’m not Aleah’s parent nor the target of her sass. 😉

Leah manages to remain calm and does a great job of explaining to Aleah that she is being rude, blah, blah, blah… (See what I did there?)

“Barb actually gets a few laughs out of Jenelle in this upcoming season!”

A VERY pregnant Jenelle gives her mom Babs a call and invites her to her baby shower dinner. (WHUH?!) Babs says she is thankful to be asked and glad that their relationship seems to be going well. “So now, I’m going walking,” Babs reveals, “because I’m so friggin’ fat I can’t even stand to look at myself in the mirror. So I’m doing that. AaaHAHAHAHHA-HA!” Jenelle can’t help but laugh out loud and mutter “Oh my god.” Jenelle=errybody

“Big changes are happening for Kailyn and Javi’s relationship this season.”

Javi and Kail (and Lincoln) discuss finalizing their divorce. Javi says with relief: “This is it. We made it. Finally!” Kail responds: “Or we didn’t make it.”

Aubree and Cole make up a batch of “powerful, butt kickin'” ghost spray! After my new favorite father/daughter duo in all of reality TV gets done mixing up some ghost spray, Aubree tests it out on Cole and Chelsea before making the entire house ghost proof. It’s unclear what effect the ghost spray will have on dogs, pigs, and awesome dentist granddads.

DUDE! I am SOOOOO ready for the new season! Thankfully, it’s only five more days as Teen Mom 2 Season 8 premieres Monday, July 17 at 9/8c on MTV!