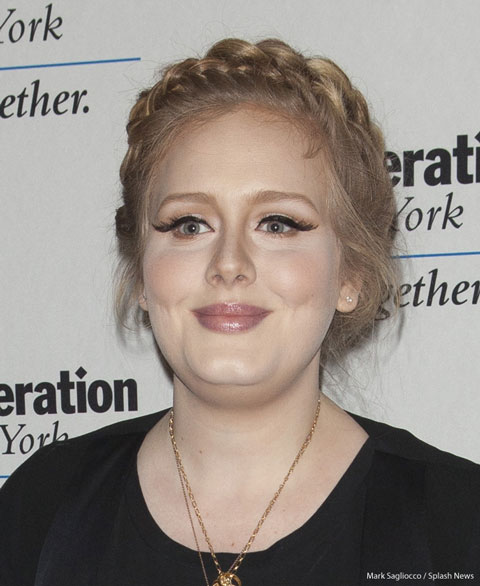 Adele resurfaced in public at NYC to attend the UJA-Federation Music Visionary of the Year luncheon in New York Friday to honor Columbia Records boss Rob Stringer. Jay-Z, John Mayer, and several other singers and musicians were also in attendance (Jay-Z and Adele even had a chat together on a couch.)

She sported some slightly different dramatic eye makeup than she usually wears, and sweet braids instead of her signature bouffant. The singer presented the award to Rob Stringer, who recalled his first meeting with her in his speech. “Your career is defined by the people you work with,” he said. “Six years ago, that young lady walked into our office with her manager and said, ‘Yeah, this’ll do,’ with a cigarette in her mouth. It’s fantastic to have her here, and she doesn’t get out much.”

The singer definitely doesn’t get out much, usually preferring to stay in with her 7-month old baby Angelo and boyfriend Simon.

VIDEO Adele goes undercover and impersonates herself to surprise fans