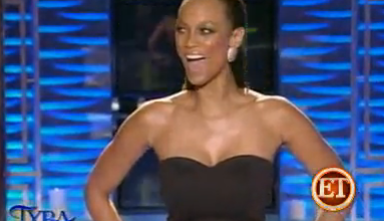 Tyra’s been building up the reveal of her new hair like it’s a Twilight sequel for what feels like years now. What we really want to see is Kim Zolciak’s real hair. UPDATE! CLICK HER TO SEE KIM ZOLCIAK’s REAL HAIR!

The former supermodel talk-show pranced out on the stage of her season premiere fresh from the shower, so fresh that we she turned around there was quite a drip going down her back. Tyra’s definitely got a high hairline, and at first it looks kind of thin and really wet, but she gets it blow dried and it’s actually quite thick. Her stylist Oscar curls it so she looks all glam and purty.

Tyra hasn’t been without weaves, wigs, extensions, or pieces since she was a teenager, so it was a monumental step for her to take. She describes her hair as an “unsolved mystery,” but again, I think she has her hair confused with Ms. Zolciak’s.

Tyra’s real hair will be on display randomly throughout the rest of this season of the Tyra Show on the CW.

Take it away, Tyra’s Real Hair, you can tell the story better than me: